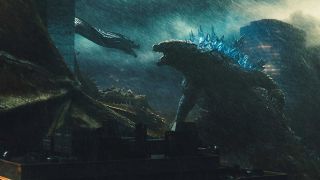 Warner Bros. has finally announced its first HDR10+ Blu-ray, 18 months after announcing it would support the format. Godzilla: King of the Monsters will support HDR10+, as well as rival format Dolby Vision and standard HDR, reports Forbes.

That means viewers will be able to benefit from frame-by-frame picture information (and hence, the promise of a more detailed image) regardless of what brand of TV and 4K Blu-ray player they use. Godzilla: King of the Monsters will be released on 27th August.

The news comes as Universal announced it too will support both HDR10+ and Dolby Vision on four of its upcoming 4K Blu-ray releases. The Secret Life of Pets 2 will be the studio's first dual-format release on 27th August, followed by Simon Pegg's Cornetto Trilogy (Shaun of the Dead, Hot Fuzz and The World's End) on 10th September.

Both announcements will be welcomed by AV fans keen to avoid another format war of the type that saw Blu-ray and HD DVD fight it out in the early years of this century.

Warner Bros. first announced it would support HDR10+ back in January 2018. The format is also supported by Samsung, Panasonic, 20th Century Fox and Amazon Prime Video, among others. Dolby Vision currently has Sony, Panasonic and Philips onboard, while it's also supported by the Apple TV 4K, Google Chromecast Ultra and Amazon Fire TV Stick 4K.

Both HDR10+ and Dolby Vision interpret picture information on a frame-by-frame basis (known as dynamic metadata), meaning they can adjust how each scene should be shown for the best possible end result. Standard HDR10, by contrast, only carries static metadata, which remains unaltered for the duration of the film. This means some scenes might not be displayed optimally. Curious? You can find out for yourself with this latest batch of 4K Blu-ray releases.