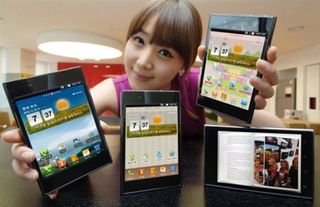 LG has unveiled a range of new Optimus smartphones of all shapes and sizes at Mobile World Congress in Barcelona.

There's an 8 MP camera, NFC and Bluetooth 4.0 support and 16GB of storage.

The Optimus 4X HD can also do 2D-to-3D on-the-fly conversion, which while it can't show on its own screen, can be passed via MHL - micro USB to HDMI - to a 3D screen. It's set to retail at around £500.

The big-boy Optimus Vu has a 5in screen, taking on Samsung's Galaxy Note in the big-screen tablet-meets-smartphone category.

It also comes with a digital pen, like the Galaxy Note's S-Pen, which can be used to copy and paste content from the screen.

Also new is the Optimus L series of affordable smartphones. Three models in all, led by the L7, with a 4.3in screen and Android 4.0 (Ice Cream Sandwich).

We'll be posting a blog with hands-on pictures of the Optimus 4X HD, Optimus 3D Max and Optimus L7 shortly.