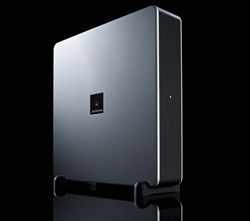 The £2000 system now has a 1TB hard drive onboard (up from 500GB), allowing it to store around 2000 albums in full lossless quality, and an integrated single zone audio renderer using Meridian's Resolution Enhancement DSP technologies.

It's also a fanless design for low noise, meaning it can be used in the main listening area.

Designed to be simple to set up and use, the Media Core 200 can integrate with other Meridian components.

It has the company's SpeakerLink outputs, as well as conventional analogue and S/PDIF digital, and can be used to create a single area system, or combined with other Meridian units to include extra storage and/or zones.

It can be controlled by any of the network-based control systems available, including Meridian’s Core Control App for the iPad or iPhone, a computer running the Control PC or Control Mac application, or a Meridian controller such as the Control 15.