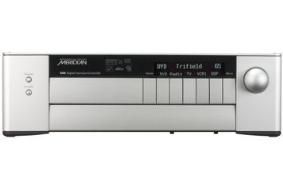 The G61R is Meridian's lowest cost full system controller. At its heart is a DSP engine made up of five Motorola 56367 devices and one 53671, running at 150MHz and delivering 900MIPS (million instructions per second).

Providing up to eight channels of output for Meridian's DSP loudspeakers via SpeakerLink, the G61R can control any of the company's multichannel systems.

For customers with traditional amplifiers and passive speakers, there's an analogue output for up to eight channels on phono connectors.

HDMI audio sources can also be connected to the G61R via Meridian's HD621 HDMI audio processor and the company's digital multichannel SmartLink connection.

Also new is the revised £5000 G68 surround controller. It has the same DSP engine as the G61R, and a similar array of inputs, but also video inputs and switching for up to three component video sources and XLR connectors for the eight-channel analogue output.

Like the G61R, HDMI audio sources can be connected to the G68 via Meridian's HD621 HDMI audio processor and the company's digital multichannel SmartLink connection.

Both models will be shown at the ISE Europe exhibition in Amsterdam on February 2-4.