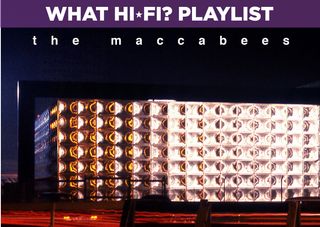 If 2012’s Given To The Wild was worth a Mercury Prize nomination, then this follow-up (somehow The Maccabees are four albums in now, which surely no-one saw coming) ought to be among the short-odds favourites for this year’s competition.

It’s by no means flawless, but there’s enough tenderness and muscularity in the writing and performances to make it the band’s best yet.

As has long since been the case, The Maccabees are at their best when baring their teeth and having a ragged charge at a tune: here the title track, Spit It Out and Something Like Happiness whirl purposefully, like a voice raised in anger but without resorting to shouting.

Slower, more reflective stuff like Silence or the limp, pedestrian Ribbon Road don’t play to their strengths at all. The notable exceptions are Kamakura, which sounds like experience was never won harder, and River Song (“you’re not getting any younger...”).

There’s not a great deal of variation to The Maccabees’ standard-indie front line of guitar/bass/drums/keyboards, but some welcome texture is added by some tastefully programmed electronics and a dash of muted trumpet.

The production – by guitarist Hugo White and Laurie Latham – is far from the last word in dynamic variation, but it’s mixed with enough subtlety to make it a particularly satisfying listen on a decent pair of headphones (such as the Award-winning AKG Y50s).

Buy The Maccabees: Marks to Prove It on CD at Amazon

Download The Maccabees: Marks to Prove It at Amazon

Buy The Maccabees: Marks to Prove It on vinyl at Amazon

Standout track: Kamakura – Old before its time, wise beyond its years, this is maturity accepted as if a curse