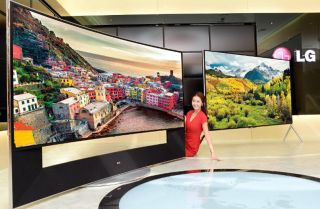 The announcement comes a week after rival manufacturer Samsung confirmed its 105in curved Ultra HD set, the UN105S9W, can now be pre-ordered by those of you who have the budget to stretch to $120,000 – around £70,000.

In comparison, however, the LG set's price tag is a mere KRW120m in South Korea – around $117,000 or £69,000 – and it boasts 5K resolution, along with Samsung in the battle to deliver the most headline-grabbing TV.

According to LG, this line-up of features "redefines immersive viewing" and will almost certainly create an impression if put in the living room. Other features include the webOS-based Smart TV platform and a 4K 3D Upscaler for non-4K content.

"The vision behind LG’s 105-inch 21:9 curved Ultra HD TV was to bring the movie theatre into the living room," said In-kyu Lee, senior vice president and head of the TV Division at LG’s Home Entertainment Company.

"Featuring a curved 5K CinemaScope screen and a 7.2 channel speaker system, the 105UC9 is LG’s most spectacular Ultra HD TV yet. This product pushes the envelope in home entertainment innovation."

The set might only have been launched in LG's home market of South Korea at present, but LG appears to have plans to bring it to other markets, stating that it'll be rolled out from the fourth quarter with pricing to be confirmed.