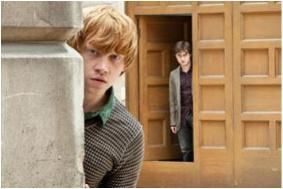 Harry Potter and the Deathly Hallows Part 1, due to premiere next month and hailed as one of the 3D movie events of the year, will now only be shown in 2D.

The announcement from Warner Bros comes only five weeks before the London premiere on November 11th, the studio citing a failure to get the film converted in time.

Its statement says that 'We will not have a completed 3D version of the film within our release date window. Despite everyone's best efforts, we were unable to convert the film in its entirety and meet the highest standards of quality.?

'We, in alignment with our filmmakers, believe this is the best course to take in order to ensure that our audiences enjoy the consummate Harry Potter experience.'

However, much of the film is ready in 3D, and it's expected that plans to release the second part of the series finale in 3D next July will go ahead.

Some industry commentators suggest that while the first part will debut in 2D, it may well get a limited 3D re-release next year in the run-up to Pt 2, to tie in with its availability on Blu-ray, presumably in 3D.

However, the decision to go with the first film in 2D is going to have quite an impact on the cinema chains: the Harry Potter release is one of the big movie events in the run-up to Christmas, and cinemas typically charge a 25% premium for seats for 3D movies.

Industry analysts suggest Warner's failure to get the film finished in 3D in time for the November release could cost up to $75m in lost revenue.