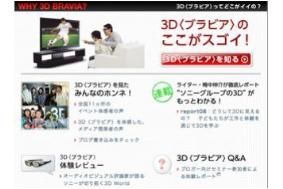 And the head of its home-market sales company says that next year most Sony TVs of 40in or larger sold in Japan will be 3D-compatible.

Year-end is one of the biggest selling periods in Japan, due to the New Year holidays and it being the time when bonuses are traditionally paid to staff, and this year there's more impetus.

An eco-points system designed to encourage people to trade up to more energy-efficient products is due to end, and Japan's broadcasting is going all-digital early next year – both good incentives for buying a TV.

Which is why Sony, which has been pursuing emerging markets with high growth potential, is now turning its attention back to the domestic arena.

Introducing its new line-up to Japanese retailers, Nobuki Kurita, President of Sony Marketing (Japan) Inc., said the company "will do its utmost in the year-end sales campaign to grab a 20% share of TV sales and at least 50% of the 3-D segment."

If it pulls that one off it will be impressive – last year Sony had a market share of just 11.2%, and fell to fourth place in home-market flatpanel TV sales, overtaken by Toshiba.

Part of its strategy will be to expand 3D capability across its larger-screen range, Kurita saying that it aims to have almost all of its 40in+ sets on sale in Japan next year ready for 3D, including some models which will be less expensive than its current offerings.

And its recent announcement of 3D TVs with built-in Blu-ray players and/or HDD recorders is also part of this greater focus on the home market: until now it has held back from such products, which are less popular worldwide than they are in Japan.

The impending arrival of such sets from other manufacturers, however, would seem to have focused its attention back on domestic preferences.