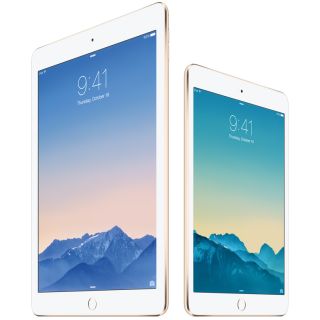 Apple has officially announced the iPad Air 2 and iPad Mini 3. The new iPad Air promises "the best tablet display you've ever seen, in the thinnest tablet".

Both the iPad Air 2 and the iPad Mini 3 feature Apple's fingerprint sensor for Touch ID, as seen on the iPhone 6 and iPhone 6 Plus.

Both new iPads are available for pre-order from tomorrow, Friday, 16th October, with shipping expected towards the end of the following week. Both will ship with the new iOS 8.1 software, which will be available as a free download for all iOS devices on Monday.

The iPad Air 2 and iPad Mini 3 come in a new gold metallic finish, as well as the familiar silver and space grey colours.

The new iPad Air 2 still has a 9.7in, 2048 x 1536 resolution display, but claims to deliver "vivid colours and greater contrast" and sports an anti-reflective coating - "the least reflective display of any tablet in the world".

The Air 2 a new A8X processor, which claims to be 40% faster than the iPad Air, with a 64-bit architecture that Apple says "is as powerful as many personal computers".

There's also a new 8MP iSight camera complete with an M8 motion chip, and a new front-facing Facetime camera, while Apple claims wi-fi is "twice as fast as the previous generation".

The iPad Mini 3 has the same spec as the existing iPad Mini with Retina display, now known as the iPad 2, but simply adds the fingerprint sensor.

Tim Cook, Apple CEO, revealed Apple has sold 225 million iPads to date. "We sold more iPads in the first four years than any product we've sold in our entire history."

A thinner design, faster hardware - the A8 processor and M8 chip - improved camera and superior screen are all likely to be present on the new iPads, while the fingerprint sensor is expected to arrive and bring Touch ID to the iPad.

Apple also confirmed it has added 500 new banks to Apply Pay, its new touch payment service for iOS devices which will go live in the US on Monday, 20th October.

Look out for our hands-on reviews of the new iPads from last night's Apple event on the site very soon.