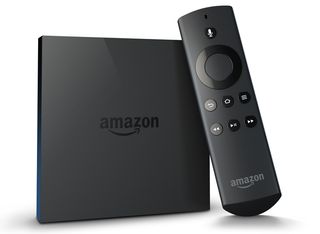 The Fire TV box will sell for £79 in the UK when it's released next month, but Prime members can get it at a discounted price of £49 until Monday [September 8th].

With the box, users will be able to access on-demand services such as Amazon Instant/Prime Video, Netflix, Spotify and more. The full list of available services can be found on Amazon's website.

Users are able to search for content using their voice and the supplied remote control. Content can be searched by movie; TV show; actor; director or genre.

Fire TV is powered by a quad-core processor giving it "3x the processing power of Apple TV" and has a dedicated GPU and "4x the memory of Apple TV or Chromecast".

Each Fire TV box is pre-registered to whoever purchased it, so it already has details allowing users to instantly access paid content.

Advanced Streaming and Prediction (ASAP) predicts what content a user will want to watch and pre-buffers it before playback so it's instantly available. An X-Ray feature allows users to view information about cast and crew on a connected Amazon tablet.

Users can also play games through the box, including titles such as Minecraft, Asphalt 9 and NBA 2K14. The supplied remote control can be used or an optional, separate game controller is available too.

The Amazon Fire TV set-top box can be pre-ordered now, for a general release on October 23rd.