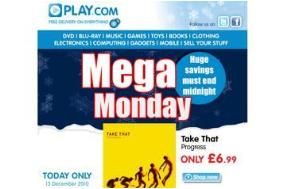 Highlights include Gladiator: Special Edition (two discs) for £6.99, The Ultimate Bourne Collection for £14.99, Sherlock Holmes for £10.99 and Inglourious Basterds for £9.99.

Among the box set offers you'll find Clint Eastwoood: Dirty Harry Collection (five discs), Fast & Furious 1-4 and The Lord of the Rings Trilogy, all at £17.99, Wallace and Gromit: The Complete Collection for £9.99, and the Spider-man Trilogy for £17.49.

And if you still need a Blu-ray player to play them on, Sony's Award-winning BDP-S370 is a veritable bargain at £99.99, plus you'll get £7.50 off the Alien Anthology on Blu-ray.