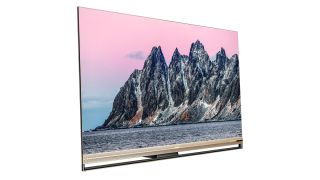 Hisense is continuing its 50th birthday celebrations with a fresh set of ULEDs and Laser TVs for 2019, including two living room-hogging 8K models with a 'Super Resolution Upscaler' to match.

If an 85in panel sounds like too much for you, then you’ll be pleased to read that a 75in model is also available.

Like Hisense’s early 2019 TV releases, the 75U9E is a dual-cell ULED XD TV. Along with the 4K 65in Hisense 65U9E (also new for IFA 2019), it uses a 1080p grayscale panel between the main image and the LED backlight, the idea bring that it improves dynamic range and colour performance.

Hisense is also introducing a 75in version of its TriChroma 4K Laser TV, as promised. The 75L9 and 100L9 Laser TVs are a projector system and anti-reflective optical screen combo. Unlike traditional projectors, they’re fitted with TV tuners and smart TV platforms to deliver content direct to users. With high brightness claims, they’re designed to be used in normal living room environments rather than specially darkened home cinema rooms.

Hisense claims a near-infinite array of colours on their TriChroma L9 Laser TVs thanks to the company’s three-light X-Fusion Laser Light Engine, meaning that the projection system requires no colour wheel which could potentially upset the show. It’s based on a DLP chip with an Ambient Light Rejecting Screen that should help to create a more natural image too.

For those looking for an even more complete home projector solution, there's also the Hisense 100L5 Sonic Screen Laser TV, which is more of a complete TV system as it includes a loudspeaker in addition to a 100in display.

Pricing and availability hasn't been announced as yet, but we'll update with more details when we get them.