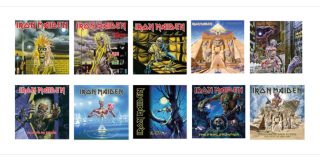 The 19 albums include all 15 of the band’s studio albums, two Best Of compilations and two live albums, all of which have been selected by Steve Harris, Iron Maiden’s founding member.

The OnkyoMusic store launched in Japan 10 years ago and was finally brought to the UK, US and Germany in 2015, in a partnership with 7digital.

The same albums were recently released in the Mastered for iTunes format, which were also encoded from the 24-bit/96kHz masters but only available as lossy downloads.

Steve Harris said: "The high-res mastering procedure allows the listener to experience the music as close as possible to the way the artist intended it to be heard. So of course I was very keen for the Maiden albums to be mastered in this way."

Tony Newton, who helped with the remastering process, said: "When a lot of these tapes were last captured it was in the 1980s, early days of digital and only 44.1kHz/16bit files were possible. On top of this the new A/D convertors are far superior now, and of course it is possible to produce files of far higher resolution.

"The result of this is that the songs now sound more defined with added depth and warmth."

The albums are available to download now in high-resolution from OnkyoMusic.com.

Iron Maiden and Onkyo also announced plans for Maiden Audio headphones back at CES 2015, though further details have yet to be released.