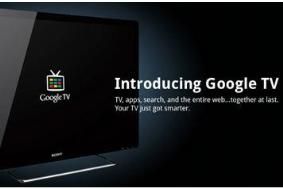 However, a report in yesterday's New York Times suggests Google is urging manufacturers to tone down any launch plans, amid poor reviews of those early implementations.

Companies including Samsung, Toshiba, LG and Sharp were expected to launch Google TV-enabled flatscreens and peripherals (including Blu-ray players), but at this point only Samsung appears to be persisting with its plans.

Early reviews - including user feedback on retail sites - of the Google TV-equipped Sony TVs and Logitech Revue set-top box have widely criticised the speed and ease of use of the service. Plus,as we reported last month, Google TV had already suffered a blow from the main US TV networks blocking their online content from appearing on the platform

However, this wouldn't be the first Google product - think of the Android mobile operating system - that has suffered from early-release issues and then gone on to longer-term success.

We'll be reporting live from CES next month, and will bring you all the news - or not - on new Google TV products, including plans for UK releases.