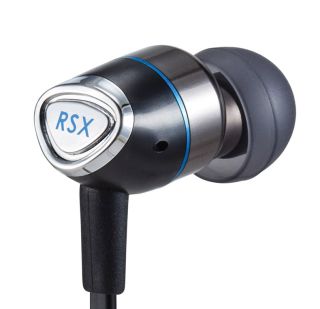 The Freedom range is a family of headphones. There’s a bit of everything, from in-ear and on-ear models to wireless cans that use Bluetooth. The in-ear headphones aim to take on the multi-Award winning SoundMagic E10S.

Next up is the Azatom Freedom RSX. These use a patented ‘Reverse Sound Technology’, which involve facing the drivers away from the ear-drum. The aim is to create a natural ‘surround’ effect. The RSX earphones come with memory foam-filled silicone ear-tips, and cost £29.

On to bigger things, and we have the Azatom Freedom PRO HE7 and PRO BE7 headphones. These are over-ear models finished with aluminium, and both cost £55. The BE7 is the Bluetooth version, and comes equipped with AptX.

Azatom also has an eye on the multi-room market, and its Stealth system is aiming to take a chunk of Sonos’ pie. The Stealth Air 2A is a Bluetooth and AirPlay speaker. The Stealth Bar AZHD1 is a soundbar with AirPlay, DLNA, Bluetooth, optical and 3.5mm connections.

The two can be combined into a multiroom system using the Azatom Multiroom app. The soundbar costs £189 (with an optional £80 subwoofer), while the speakers cost £150 each.

All of the products feature Azatom’s proprietary technologies, developed in the UK.