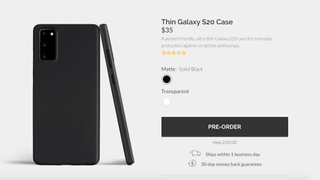 Key aspects of the Samsung Galaxy S20's design might have been revealed – but not by Samsung. US case maker Totallee has just unveiled three cases ahead of the phone's official launch on 11th February.

More interestingly, they appear to confirm the number of cameras on each device. The Galaxy S20 gets three, while the S20+ one-ups that with four. The pricier S20 Ultra, which is rumoured to tote a 108-megapixel sensor, also appears to tote four cameras.

"We have a track record of releasing correct cases pre-launch for the past 6 years," a Totallee spokesperson said to the Sun. "We're so confident that we got the cases right again that we’re offering our customers a money-back guarantee on all pre-orders."

Samsung hasn't confirmed that the cases are legit, but we won't have to wait long to find out. The South Korean tech giant is set to unveil its newest flagships during its Unpacked event on Tuesday 11th February.

Excited for the launch of Samsung's newest iPhone-killer? Why not check out round-up of Samsung Galaxy S20 leaks and latest news.