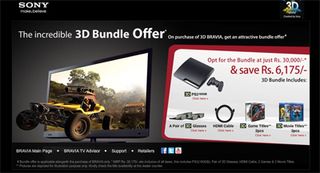 Sales expected to fall short of previous predictions due to slow European and US markets; 3D TVs set for stratospheric sales growth; China set to overtake Japan in LCD manufacturing; cricket coverage boosts Indian flatpanel market, but 78% of all sales there are still small-screen, and CRT

I've been spending the past couple of days wading through a whole load of figures about the worldwide TV market, both current and near-future, and it makes for fascinating reading. Not least of the facts to emerge is how hard TV manufacturers are having to work to establish flatscreens – now dominating the market in the US, Europe and Japan – in emerging markets such as India.

And while the latest predictions suggest worldwide sales are still slowing down – thanks in no small part to continued economic woes in both the USA and Europe, and the effect in Japan of the March earthquake and tsunami on a market already slowing sharply as an eco-promotion ended – there's one area in which sales are set to skyrocket.

2.5m 3D TVs were sold in 2010, but that figure's expected to rise to almost 21m this year – not least, presumably, because just about every larger-screen 2011 flatpanel TV is either 3D-capable out of the box, or 3D-ready.

Those figures, from industry analysts DisplaySearch, are all the more striking in the face of revised market sizes from the company, which has downgraded forecasts for the next few years.

Having earlier predicted sales of almost 217m LCD TVs this year, it's now saying just under 210.5m sets will be sold, and that the premium LED-lit LCD TV sector will also be down on previous expectations, at just under 100m units.

However, while overall LCD TV sales will also fall short of expectations over the next three years, the LED sector will grow rapidly: next year 156m of the 232m LCD TVs sold will be LED-lit, in 2013 LED will account for 204m of a total 250m LCD sets, and of the 265m LCD TVs sold in 2014, almost 241m will have LED lighting.

...And China getting stronger

Of those LCD TVs, an increasing proportion will use panels made in China, with the new 6th and 8th generation production facilities of Chinese companies such as BOE, ChinaStar and CEC ramping up over the next year or so, and more production capacity being planned for 2012.

In the first quarter of this year, Chinese companies made 3.3m panels in the large area TFT LCD sector, which covers everything from tablets and netbook computers up to TVs – about the same as the output of Japanese companies.

This quarter, however, Chinese manufacturers are expected to make some 4.1m units, while Japanese factories make just 2.3m, and the Chinese lead is expected to be maintained through to the end of the first quarter of next year.

Interesting times in the LCD panel world, then, with China gaining strength as Japanese companies increasingly look to cut costs by outsourcing panel production or looking for joint ventures or licensing deals.

However, while China's share of the panel market, currently just ahead of Japan's 5.8% at 6%, is expected to pull ahead to 7.4% while Japan declines to 5.8%, those figures are unlikely unduly to trouble the giants of the LCD-making world.

Another kind of World Cup

Finally, some fascinating figures from the Indian market, showing the effect major sporting events can have on TV sales. Driven by the Cricket World Cup, LCD TV shipments in India rose 94% year on year in the first three months of this year, with a million TVs sold.

However, the Indian market remains a law unto itself when it comes to market shares: good old CRT TVs still dominate, with a 72% share in the first quarter of this year, although flatpanels nibbled away 2% from the previous quarter's 74%.

And smaller screens are very big in India, so to speak: the dominant size range is 22-24in, with 41% share, ahead of the 32in screens which lead most other markets. And in CRT TVs, the biggest sellers are 14-21in models.

Similarly, manufacturer market shares are unusual in India: Sony leads the market on 20.9%, just ahead of Samsung on 19.3% and LG on 18.4%, with Indian company Videocon fourth on 12.5% and Panasonic fifth with 8%.

India is one of the target markets for TV manufacturers, both India-based and from overseas: with flat demand in traditional markets such as Europe, North America and Japan, companies are looking to growing markets such as the subcontinent, China and South America to take up some of the slack.