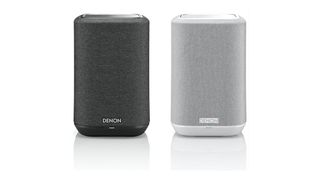 Denon has been in the multi-room speaker game for some time (five years, to be precise) with its HEOS sub-brand, but it’s now shaking things up by taking multi-room back under the Denon name.

The all-new Denon Home range is (at launch) comprised of three wireless multi-room speakers built on the HEOS platform – the move suggests HEOS will be purely a software brand as opposed to a hardware one from now on.

The Home 150 (£219/$249) is the range’s baby – think along the lines of the Sonos One – housing a 3.5in woofer and 1in tweeter within its diminutive chassis. The Home 250 (£449/$499) doubles that tweeter and woofer count, with each driver driven by four power amplifiers, and adds a passive bass radiator. The flagship Home 350 (£599/$699), meanwhile, brings the biggest brunt with six channels of amplification feeding two 6.5in woofers, two 2in mid-range drivers and a pair of tweeters.

All speakers are as well equipped as you might expect from multi-room streaming speakers, and then some. Via the HEOS app there’s access to Spotify, Apple Music, Amazon Music HD, Tidal, TuneIn and Deezer, to name a few, and connectivity extends to AirPlay 2, Bluetooth, USB and 3.5mm across the range. In addition to ALAC, FLAC and WAV support up to 24-bit/192kHz, there is also DSD 5.6MHz playback.

Voice control is also on the menu, with Denon Home control possible via third-party Siri, Google Assistant and Alexa devices. Each of the speakers has an integrated microphone, too, with native voice assistant support to be added via a firmware update in 2020. With that, they'll also fall into the 'smart speaker' category.

The benefit of their HEOS foundations: owners of Denon or Marantz AV receivers, soundbars and systems that have HEOS functionality can add the Denon Home speakers to their current set-ups. For example, two of the Denon Home speakers can be used as rear surround channels for the Denon DHT-S716H soundbar and DSW-1H subwoofer to create a fully fledged, Dolby-decoding 5.1 sound system.

While that sets the Home speakers apart from their competition, what doesn’t particularly is their aesthetic, which is familiar to the competition – and not in a bad way. We've had the pleasure of a sneak preview of a pre-production sample, and the finish and build makes them mantelpiece worthy.

There are a couple of neat design tricks too: the touch panel's Quick Select (i.e shortcut) buttons (three on the 150 and 250, six on the 350) allow you to save internet radio stations to each for one-touch access, while a proximity sensor illuminates the panel when it detects an approaching hand (as illustrated above). The in-vogue wraparound cloth is water-resistant, too, so owners needn't avoid placement in a kitchen or bathroom.

Needles to say we look forward to putting the Denon Homes against the ever-increasing competition.

Best multi-room systems 2019: one system to rule them all