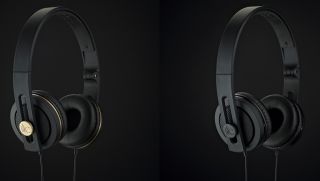 The company, also claims to have developed a new material for its Carboncans, made from a nylon/carbon compound.

Designed in tandem with the "UK's premium automotive sector", the company says the new material provides the perfect balance between strength, flexibility and comfort. The cans also claim to be "weatherproof" and durable thanks to a "rubberized soft touch paint", again, borrowed from the car industry.

The headphones have a closed-back, on-ear design and can be folded-up so they're easier to lug around. They also sport an in-line microphone for making voice calls.

And the vinyl resurgence has clearly caught the company's eye, with the sound character of the Carboncans claiming to be aimed at people who love the sound of vinyl. "Gone is the over-bearing bass and in comes a quality and refinement in sound across the full frequency range", claims Angle & Curve.

The man behind the sound, and the company, is Richard Wheeler, who previously worked as an audio engineer for a DJ equipment company, and who has also worked for Aston Martin, which might explain the car industry connection. These headphones originally started life as a Kickstarter project.

Wheeler told What Hi-Fi?: "I don't want to sound jingoistic but my passion is British manufacturing, I was told it was impossible to compete by making headphones in the UK, as I am from a family of engineers I set out to prove it was possible to make a good headphone at a reasonable price.

"I designed the headphone with 7 core parts (as opposed to the 20 odd found in many versions) , which in turn greatly reduced tooling costs, assembly costs and also improves reliability."

The headphones are designed in London, manufactured in Birmingham and hand-built in Stratford-upon-Avon. Available in a variety of finishes, the Carboncans are on sale now priced at £120 (US$140, 150 euros).