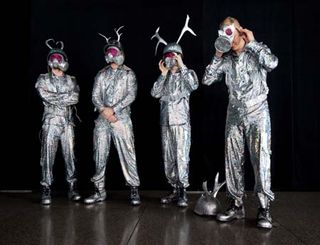 Bowers & Wilkins has teamed up with Apparatjik – the music collective founded in 2008 – to offer its latest album as an exclusive 24-bit FLAC download.

Square Peg in a Round Hole - Draft 7 is available to fans and B&W Society of Sound members via Apparatjik's Facebook page. Just follow that link, 'like' the page and you'll be able to download the hi-res audio file once you've filled in your details.

This version of the album takes the original 24-bit files from Draft 1, which were then mastered by Geoff Pesche at Abbey Road Studios in London.

The collective operates as "an experimental platform" and collaborates with a pool of artists, media technicians and designers, as well as scientists.

Following the release of We Are Here in 2009 and a number of live performances and installation art projects, Apparatjik is now embarking on a new phase with the launch of Apparatjik World.

During 2012 this will involve the launch of an iPad magazine (available now through the App Store), the release of the new album and a series of performances around the world, including London, Oslo, Copenhagen and the US.

Initially available via Facebook, this special 24-bit FLAC version of the album will later be offered as a bonus album to B&W Society of Sound members.