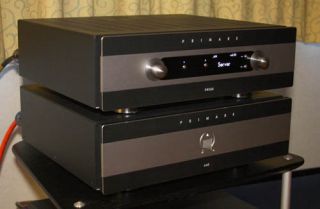 Primare has officially unveiled its 60 Series pre/power amps at the Bristol Show 2014.

The PRE 60 is a preamp, DAC and streamer in one integrated system. It supports high-res audio files up to 24bit/192kHz from a number of sources, including USB, iPod, LAN and internet radio, as well as the usual analogue and digital inputs.

At £6500 a piece, the new components take Primare back into the high-end market and are a major step up from the 30 series.

The PRE60 is a reference audiophile dual-mono pre-amplifer to complement all high-end power amplifers, but primarily the matching A60 UFPD power amp. It has a comprehensive OLED display and two pairs of low-noise balanced XLR inputs and four pairs of RCA inputs.

Meanwhile, the A60 is a fully balanced 2 x 250W UFPD stereo power amplifier that is designed to provide high power output with very low distortion through four discrete amplifers (two per channel).

We also had a peak at Primare’s free iOS and Android app, which allows you to control the system and install firmware updates.

The units we saw were in a smart two-tone titanium and black finish – unusual for Primare – but we were told they are also available in all black or titanium.

The amps cost £6500 each and will be available in April.