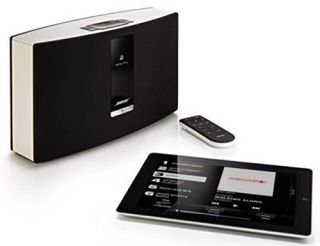 Bose has launched three new wireless streaming music systems, the SoundTouch Portable, SoundTouch 20 and SoundTouch 30, as part of a new SoundTouch line which will be joined by a host of other wireless products over the coming months.

The three launch products can stream music directly over WiFi from any connected computer, tablet or smartphone, and also support Apple AirPlay streaming.

What's more, you can link multiple speakers for a multiroom system, playing either the same music or different music in each zone. Sounds like a fully-fledged Bose alternative to Pure Jongo and Sonos, then.

The three initial Bose SoundTouch products will be joined by the Bose Wave SoundTouch system later this, and then the SoundTouch Stereo JC Wi-Fi, which comprises two Jewel Cube speakers and an Acoustimass module subwoofer.

There will also be Bose SoundTouch outdoor speakers and versions of the VideoWave and Lifestyle home entertainment systems. Bose isn't taking this lightly, then. How about Sonos Playbar style soundbar?

The Bose SoundTouch 30 WiFi system is the flagship product at launch. It costs £600, measures approximately 25 x 43 x 18cm (HWD) and sports Bose's waveguide technology and a new driver unit developed for the system.

As well as streaming music from your device over WiFi or using AirPlay with iOS devices, the SoundTouch systems feature six presets on the systems themselves and the Bose SoundTouch app, which allow you to go straight to any internet radio station, track or playlist.

The free app is available on Android and iOS tablets and smartphones, plus Mac and Windows computers, while there is also a SoundTouch controller remote.

"If you have WiFi at home and a computer, you have all you need to stream your stored music, Internet radio or music services", says Bose.

For now, those music services seem to be limited to Pandora, which is only available in the US, Australia and New Zealand, though "Deezer, iHeartRadio and others" are promised to join them.