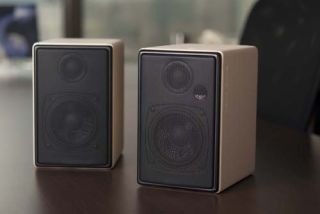 Blue Aura has released a new pair of Bluetooth wireless speakers, the x30.

Blue Aura has been producing wireless speakers and speaker systems since 2010, but now wants to bring Bluetooth technology into the company's products.

The x30 loudspeakers feature 20 watts-per-channel Class D amplification, and connect via a 3 metre 'Quick Connect' cable, which Blue Aura includes in the box.

In addition, the x30s boast Bluetooth 4.0 with aptX wireless technology, which should deliver superior wireless sound when connected to an aptX-compatible device.

Mobiles should have a wireless reach of around 10 metres, and for those devices that have it, NFC pairing is also available.

Wired connectivity is also an option, with optical and stereo RCA inputs both on board. For a 2.1 set-up, a subwoofer output is provided.

By plugging in the Blue Aura WAS1 transmitter and receiver system to the USB socket, users can also wirelessly pair the x30s with other USB-enabled systems.

The Blue Aura x30 speakers are available now in either Graphite or Sahara faux leather finishes. The speakers come with a remote control, and can be wall mounted using Blue Aura's wall brackets, which are sold seperately.