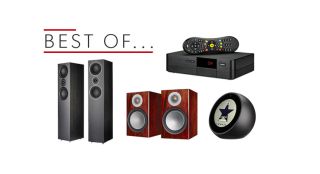 This week it emerged that Virgin Media customers could soon be receiving the V6 set-top free of charge, Devialet partnered with the Royal Albert Hall to showcase the company's Phantom speakers and 4K Dolby Atmos films have started appearing on Sky's Q service.

Virgin Media subscribers could soon be getting a new black box in their front room.

Those who use the company's TV and broadband bundles will soon be able to upgrade their set-top box to the V6 model at no additional cost.

Eligible customers will be contacted in the coming weeks about how to obtain the V6 box.

Devialet has announced a partnership with the Royal Albert Hall that will see multiple Phantom speakers located around the venue.

The Phantoms will be used to broadcast performances in real-time outside the Hall, as well as benefit visitors to its restaurants, cafes and tours.

Devialet says the experience will be different to the Palais Garnier display in Paris, but will bear some similarities. A date for the installation has yet to be confirmed.

Sky has previously broadcast Premier League games in Atmos, but now you can watch the likes of Ghost in the Shell, Jack Reacher: Never Go Back and Star Trek Beyond. However, out of the 103 films available, fewer than a dozen are available in Atmos.

You'll need a Sky Q 2TB box, a Sky Cinema subscription and, of course, a compatible home cinema kit to enjoy them.

11 of the best 4K Blu-rays to test your system

DTS Play-Fi - everything you need to know

What is QLED TV? How the next TV tech compares to OLED

It's more of the same from Monitor Audio's Silver range, and that's no bad thing as far as we're concerned.

They are bold, punchy and well-balanced, with an impressive sense of timing and dynamics. They're more expensive than the Q350s, but the Silvers are a formidable opponent and more than hold their own.

We've come to expect excellence from the Silver range and the 100 is no different.

It looks like a simple alarm clock, but there's more than meets the eye to this smart device from Amazon.

It has built-in voice assistant, features a camera and you can watch Amazon Prime on it. It's one of the more capable smart devices we've come across.

The sound quality could be improved and there needs to be more video content. The camera could be a little intrusive, but this is an impressive piece of kit.

Mission's budget floorstanders are solid and capable performers, but they are eclipsed by other performers.

We like the controlled and articulate sound and the good integration between the low-end and midrange. However, the sound lacks a little excitement.

They're rather in the shadow of Tannoy's cheaper Eclipse 3s. While we like the LX-3s, we're left wanting more from them.