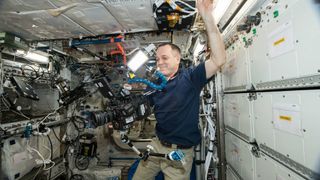 Like it or not, 8K TVs are here - and NASA is treating early adopters of the next-gen telly to some native 8K footage of space to play on them.

NASA and ESA (European Space Agency) have brought us the very first 8K video from space. The three-minute video on YouTube sees astronauts living, working and conducting research from the International Space Station, from both inside and outside its orbiting laboratory.

The release of the footage celebrates the 18th anniversary of humans living continuously aboard the station, and the 20th anniversary of the launch of the first two space station elements in 1998.

An 8K TV or monitor is necessary to play the video in its full resolution, however those with 4K TVs and lower-resolution screens should still reap joy from a down-converted playback.

You can download the video in full resolution here.

The 8K TV state of play, according to LG, Samsung, Sony and more