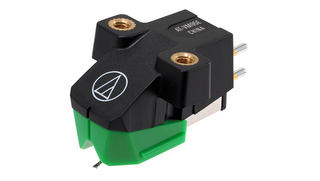 In addition to launching its first ever pair of true wireless buds, Audio Technica has today announced the launch of six new budget moving-magnet cartridges - one of which succeeds the company’s AT95E budget cartridge that appears on the AT-LP5 turntable we handed five stars and an Award to.

Below the 95E sits the AT-VM95C (£29), which is furnished with a conical stylus plus new aluminium cantilever and coil designs.

Next up are the AT-VM95EN (£99) and AT-VM95ML (£149), which feature elliptical and Line Contact MicroLinear styluses, respectively.

Last but not least, the AT-VM95SP (£69) has been designed exclusively for 78rpm SP records.