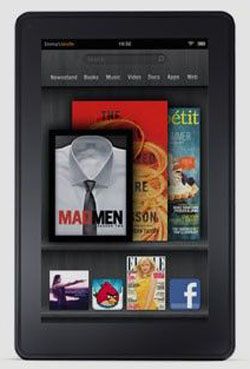 Amazon's much-anticipated Kindle Fire does look set to come to the UK and hopefully as soon as January 2012.

Billed as a serious rival to the iPad, the Kindle Fire is a fully-fledged multimedia tablet, set to be backed by Amazon's hefty library of books, music, movies and more.

After an initial lack of information regarding a UK release - the tablet is already on sale in the US - rumours have emerged suggesting the Kindle Fire will come to the UK in January.

Website KnowYourMobile claims a source close to launch has given them the nod that we can expect the Kindle Fire in the UK soon.

Pricing and a confirmed release date, still remain to be seen.

The new basic Kindle will cost £89 in the UK and will be released on October 12th.

UK release information for the Kindle Fire and Kindle Touch has yet to be confirmed. Original story below.

Amazon has launched the Kindle Fire, its first multimedia tablet and a rival to the Apple iPad.

Set to go on sale for $199 in the US, the Kindle Fire is available for pre-order now and will begin shipping on November 15th.

Sporting a 7in screen, dual-core processor, a customised version of the latest Android 3.0 Honeycomb OS and direct access to Amazon's music, book and video stores.

Most notably, the Amazon Prime service will give direct access to streaming to 100,000 films and TV shows, and some 13 million songs.

The Kindle Fire is a wifi-only device, with no 3G access. Another notable absentee compared to most tablets is the lack of any camera.

It does however have 'whispersync' technology, allowing for wireless syncing of content between devices, for example your Kindle Fire and TV.

The standard Kindle meanwhile has had a price cut, now down to $79, and was joined by two touchscreen models.

While release dates should be the same in the UK, the prices have yet to be confirmed.