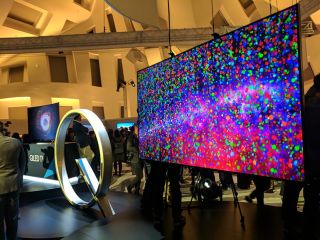 Samsung has announced Amazon Video as the first content provider to support its HDR10 Plus standard.

Made available to third party companies in March of this year, HDR10 Plus is a form of metadata analytics developed by Samsung, based on HDR10 technology.

'Metadata analytics' sounds quite involved, but it's pretty simple to explain: the selling point is that HDR10 Plus has dynamic metadata. This allows the TV to adjust brightness levels on a broadcast to each scene, or even each frame, aiming for a more accurate representation of how the scene 'should' look.

Static metadata, which HDR10 uses, keeps the same metadata throughout a TV program or film - meaning bright scenes could come across as darker than intended (or visa versa) because the television is set at an overall, 'static', brightness level.

Samsung says a firmware update will be available later in the year for existing 2016 4K Ultra HD TVs, while its current top-end QLED televisions come with HDR10 Plus support built-in.

The development of HDR10 Plus sets a challenge to Dolby Vision, which also uses dynamic metadata to try and get an optimal picture. Both Netflix and Amazon Video support Dolby Vision HDR streams, as does the video game Mass Effect: Andromeda.