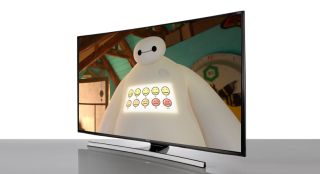 Next year, one in five new TVs will be 4K, according to US-based research company IHS Inc. Its latest research shows more than three million 4K sets were shipped in April this year alone.

If the monthly figures remain steady for the rest of 2015, the year's total will reach more than 36 million units – over three times the amount in 2014.

No doubt the falling price of 4K TVs is playing a crucial part in the flourishing figures, not to mention the increase of 4K content, products and services. 4K streaming service catalogues – from Netflix and Amazon – are steadily building; Ultra HD Blu-ray discs and players are expected by the end of the year; and 4K-supporting set-top boxes and broadcasts are on the horizon.

BT Sport recently announced it was going to launch an Ultra HD channel in August and broadcast events such as the Community Shield, UEFA Champions League and Aviva Premiership rugby in 4K resolution.

HDR: is a format war brewing?

Now that the UHD Blu-ray disc spec has been confirmed, all eyes are on another of 2015’s buzzwords: HDR (High Dynamic Range), a technology that promises even brighter whites and darker blacks.

As the theory goes, the higher the dynamic range of the TV, the more lifelike the picture will look.

HDR is confirmed for UHD Blu-ray discs, but the standards of the technology and how it’s going to be implemented are still up in the air.

Hanno Basse, president of the UHD Alliance – a new body working towards an industry-wide standard for all 4K specifications – has made it clear they "want to have a first version [of HDR standards] later this year to coincide with the Blu-Ray Disc Association.”

Two of the biggest players at the HDR spec-setting table are Dolby and Technicolor, both UHD Alliance members.

Dolby is working on its own line of attack with companies like Vizio and Warner Bros; its Dolby Vision imaging technology promises a wider colour palette, enhanced dynamic range, and dramatically increased contrast ratio – but only with a Dolby Vision-compatible display.

In an interview with HDguru.com, Technicolor’s business development vice president Mark Turner says Technicolor would prefer a more “open HDR standard that can be used on any display”.

"We don’t believe our content-owning customers are best served by creating proprietary HDR grades that only work within certain closed ecosystems," he said.

"Direct backwards compatibility is a key feature for pay-TV operators, broadcasters and even OTT providers who want to use only one file that can deliver both HDR and SDR."

Turner also claimed that Technicolor is developing the 'world’s first' UHD HDR set-top box. The backwards-compatible box will decode both HDR and normal (Standard Dynamic Range) content, accommodating those ready to adopt the next-gen video technology, as well as those who aren’t.