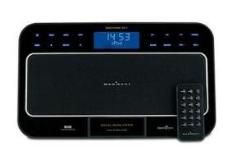 The Magicbox has some decent features, but sound quality can definitely be bettered for the money

iPod docking alarm clocks are big business, and there's a huge range of options out there. Is the Magicbox XP-1 a machine that's worth investigating?

DAB and FM radio are both included, with a total of 20 presets at your disposal. Positioned above the two, seven-Watt speakers is a large, bright, blue-on-black display that shows information such as the time and the radio station and track that you're listening to.

Either side of the display are an assortment of neon blue, touch sensitive buttons that control various functions such as auto-tuning, setting the alarm clock and switching input. They're responsive and nice to use.

Retractable iPod dock
At the base of the radio is the retractable, iPod compatible dock. On the rear of the XP-1 you'll find a headphone output, auxiliary input and line output. For the money, you can't grumble.

Which is a shame, because the only aspect of performance that lets the XP-1 down, is the most important: sound quality. Dialogue on the radio and vocals during music sound very congested and muffled.

And, although treble doesn't sound bright or hard, there's a major lack of refinement. Considering the XP-1 has a 20 Watt subwoofer there's only a token amount of bass too.

The XP-1 is perfectly acceptable in terms of build, features and pricing, but the sub-standard sound quality really lets the side down, so three-stars is as high as we can go.