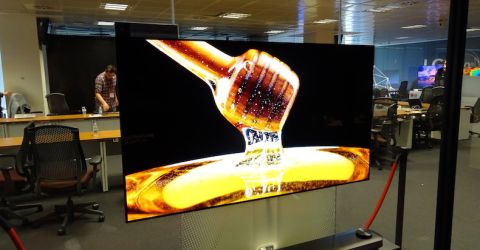 It’s over a year since LG wowed us with the launch of its W7 ‘wallpaper’ OLED TV. We’d never seen a flagship set quite like it. Wafer-thin (2.57mm to be precise), flexible and held on the wall by magnets, it was a clever and dramatic way of making an OLED TV uber-desirable.

To prove it wasn’t a one-season wonder, LG’s 2018 range of OLED TVs is headed up by a new ‘wallpaper’ range, W8 OLED, which aims to pick up where W7 left off.

Like its predecessor, the LG W8 Signature OLED takes a two-part approach to delivering sound and vision. The OLED panel and its accompanying soundbar are kept separate - they're connected by a flat umbilical cable that slots into a port on the back of the bar.

The panel is fixed to your wall using the supplied bracket and a couple of carefully positioned magnets - the result is a TV that looks like it's hanging like a picture frame.

From a features point of view, the W8 shares a lot of similarities with the 2017 model.

The soundbar is the hub for all your connections with four, 4K HDR-compatible HDMI inputs, three USB sockets and one optical digital connection provided. TV tuners and Bluetooth functionality are also built-in.

LG's attractive WebOS operating system remains largely untouched for 2018. There have been a couple of tiny tweaks to the on-screen display text, LG's content store has been given a tidy, and a new search feature has been added to the Home screen.

As per normal, your journey through the Launcher Bar and the various menu screens is controlled by LG’s motion-sensing Magic Remote. On the surface, the whole system appears as inviting and intuitive as ever.

One addition for 2018 is LG’s ThinQ AI brand of artificial intelligence. It's designed to make LG’s TVs even smarter, and allows for a more natural range of voice commands for the viewer.

You can now change a channel, search for programmes or check the weather using a range of commands initiated by holding down the mic button on the remote control.

The big news for the W8 is the arrival of LG’s Alpha 9 picture processor.

Brand new for 2018 and available on all ranges bar the B8, LG claims the A9 improves picture performance on a number of fronts - including noise reduction, sharpness, depth enhancement and colour reproduction.

Content at LG’s Madrid HQ is a little thin on the ground, so we're limited to the usual loops of 4K footage, including a couple of demos of Dolby Vision.

One scene shows honey slowly dripping from wooden dipper. The glossy liquid pops off the screen, the vibrant golden hues surrounded by a sea of inky blackness.

The content then switches to a colourful jungle scene full of thick, luscious foliage. Greens and browns are the order of the day here, and the LG seems to be in its element, delivering an impressively sharp picture with an excellent depth of field. It's just like looking through an open window into another world.

We also have a chance to play around with LG’s Dynamic tone mapping, which introduces dynamic metadata for static HDR formats such as HDR10 and HLG.

In our brief time switching the processing on and off it appears the picture looks a tad punchier, and hints at greater stability and detail around dark and light spots.

Obviously, we need more time to play around with all the various picture modes and settings using a wider range of content before we draw any concrete conclusions.

According to LG, the soundbar's audio innards haven't changed for the W8, and during a quick blast this seems to be the case.

Its balance still appears to be tilted in favour of mids and highs, but there also seems to be a good level of detail and clarity along with it. Admittedly, our listening session isn’t helped by the fact the W8 is in a demo space surrounded by glass and plastic surfaces. Acoustically sympathetic it was not.

On the plus side, we do get a sense of the audio coming at us from the OLED panel rather than from under it. During one Dolby Atmos demo clip which walks the viewer through a number of small underground crevasses, we can hear the various echoes and reverberations of people talking and other effects traveling up the walls adding to the atmosphere.

Another demo clip places the listener at the mercy of a thunderstorm and torrential downpour. Again, the soundbar appears to do a good job of creating an enjoyable enough atmosphere. With Atmos switched off the audio appears to lose some of that sense of scale.

The novelty factor of LG’s wafer-thin wallpaper TV still hasn’t worn off. It’s an impressive-looking telly that appears to not only match last year's model pixel for pixel but, potentially, exceed it.

Even more exciting is the picture quality we see in the W8 should (theoretically) be mirrored in most of LG’s OLED TV ranges this year - G8, E8 and C8.

We’ve already had a brief taste of the OLED55C8 but we’ll need a bit more time with the sets in our test rooms to bring you our definitive verdict.