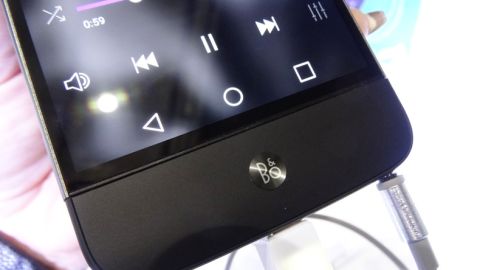 At MWC 2016, LG announced its new LG G5 flagship handset with modular design. The bottom section of its unibody design pops out and not only allows you to swap out the battery, but also enables you to customise the handset as well.

LG announced two modules during the press conference – the Cam Plus, which works as a camera grip with controls while also doubling as an extra battery, and the Hi-Fi Plus, a 32-bit DAC for getting the most out of audio on the go.

We got hands – and ears – on the Hi-Fi Plus DAC module at the show, so read on for our first thoughts.

The Hi-Fi Plus module is a 32-bit DAC and headphone amp developed in partnership with B&O. It features an ES9028C2M + Sabre9602 chipset for supporting music up to 32-bit/384kHz, bypassing the G5’s built-in 24-bit DAC when used with the handset.

When connected, it sits as flush to the phone as the regular base, just adding a few millimetres to the length.

It features its own headphone jack (you can use the regular jack on the top of the handset at the same time if you wish), its own speaker and the USB-C charging port.

It can also be used as a standalone DAC and headphone amp with other phones and devices thanks to the USB-C port built into the cap, which sits on top of the Hi-Fi Plus module when not connected to the G5.

The Hi-Fi Plus clicks into the base of the LG G5. There’s a bit of a knack to it, but once you’ve done it a few times, it’s easy to do – you can watch our video above to see how it’s done.

Once it’s connected, you’re ready to go. Plug your headphones into the headphone jack, play some music and the Hi-Fi Plus will do the rest.

We listen to a 24-bit/192KHz recording of A-Ha’s Take On Me, and Glen Hansard’s Winning Streak in 24-bit/96KHz using the B&O-tuned module, and are suitably impressed.

Take On Me shows off the G5’s great sense of timing, with plenty of drive to keep pushing the upbeat track forward with enthusiasm. It does itself proud with dynamics too, with enough space in its presentation for the choruses to build to their high-pitched conclusion.

Its subtle side is uncovered in Winning Streak, the G5 doing well to pick out texture and detail in the guitar strums and vocals – we love just how clear and spacious both tracks sound too, offering up separation to all parts of the track.

There could perhaps be a little more bite to its character but it’s far from lackadaisical and there’s still plenty of punch there to keep it engaging.

We weren’t able to compare a G5 with and without the Hi-Fi Plus, so how effective it is – and how good the LG G5 sounds without if for that matter – will have to wait for our full review. For what it’s worth, compared with a Spotify stream on an iPhone 6s, there was considerably more space, clarity and detail to the G5’s presentation - but that is only to be expected.

We don’t yet know how much this add-on module will set you back, but we do know LG will be offering it in a bundle alongside a pair of B&O H3 earphones.

The LG G5 will be available some time in April though, so we expect the Hi-Fi Plus will launch at the same time. We’ll bring you more details as soon as we get them.