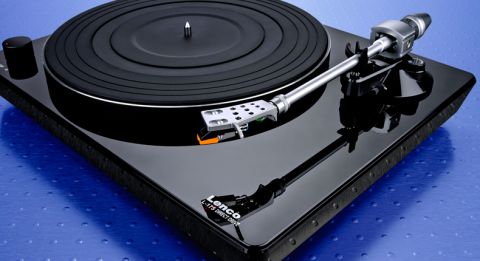 Good for convenience, but at this price it’s outgunned when it comes to sound

It’s been an interesting journey for Lenco. Back in 1946 it was a Swiss brand that developed a strong reputation for turntables. Then, in 1997, the brand was taken over by the Dutch STL Group.

These days, Lenco makes clock radios and Bluetooth speakers alongside tablets – and turntables, of course.

So, the Lenco L-175. Initial impressions are good – it’s a smart-looking deck. The glass-topped plinth helps create a mildly executive vibe, although it will be covered in fingerprints if your digits go anywhere near it.

Under the glass, the rest of the plinth is made of plastic, which feels a little insubstantial.

There’s no mat, but you get a layer of rubber on top of the aluminium platter. Set-up is easy. The moving-magnet cartridge comes factory fitted, which saves a lot of time.

And the headshell is removable, so you’ll have an easier time installing a replacement. Attaching the counterweight is swift work, as is adjusting the anti-skate.

Peek round the back of the turntable and you’ll see a few handy extras. There’s a USB output for recording to your PC or Mac, which you can do with the bundled copy of Audacity.

There’s also a built-in phono stage. It works, but it’s not amazing. The sound is restrained. There’s less attack than we’d like and it’s not a very exciting listen.

Dynamics are definitely lacking. The treble felt a bit fizzy and splashy. Switch to a dedicated phono stage, such as the Rega Fono Mini A2D, and the results are a clear improvement.

There’s more detail, and greater drive and attack. The performance feels a lot less reluctant, and there’s a sense of pep. Basically, don’t rely on the built-in phono stage. Sadly, it’s not enough.

We switch to the Project Debut Carbon and the Rega RP1 Performance Pack, and it becomes clear the Lenco is in trouble.

Compared with the competition, it needs wider dynamics, more insight and a stronger sense of enthusiasm.

It’s never quite as driven as it should be: Dukas’ The Sorcerer’s Apprentice just doesn’t have the energy and the emotional connection it should have. At the top end, things are a little bright too.

The Lenco L-175 is a turntable of convenience, rather than quality. The electronic speed change and direct drive design mean no faffing about with belt pulleys.

The detachable headshell makes it easy to swap cartridges. Then there’s the built-in phono stage and USB output.

If recording to your computer is a must, and you’d rather focus on ease of use, then this may be worth considering.

In terms of sound quality, however, we find ourselves disappointed.