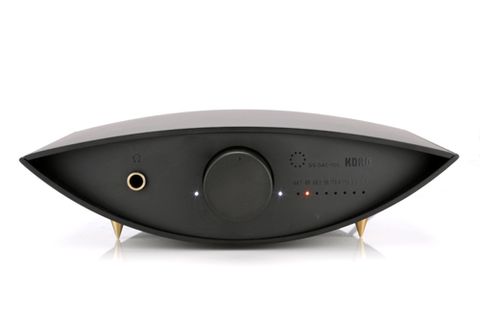 A decent DAC that handles DSD files, but cheaper rivals better it with normal hi-res material

Korg is best known as a maker of musical instruments and studio-orientated electronics, so it’s something of a surprise to get a domesticated DAC/headphone amplifier from the brand.

The DS-DAC-100 is hardly a run-of-the-mill product though, as is apparent from its swoopy shape.

You’ll find just a single asynchronous USB input and a trio of analogue outputs – one for headphones alongside line-level single-ended and balanced XLR connections.

That prominent volume control on the front panel works only with the headphone output, so the DS-DAC-100 can’t be used as a stripped-down digital preamp like Cambridge’s £300 DacMagic Plus.

The Korg is also somewhat unusual in that the company has gone to the trouble of developing dedicated media-playing software for it called AudioGate.

Use the DAC and software together and it is possible to stream DSD music files as well as the more conventional PCM files (upper limit 24-bit/192kHz).

The AudioGate software can even convert such files to DSD on the fly, using your computer’s processing power to do the number crunching.

There are sonic benefits in doing such a conversion – there’s an increase in sonic fluidity, for example. But there are also compromises when it comes to rhythmic precision.

The DS-DAC-100’s build is good. We’re impressed with the curved casework, which is solidly put together and nicely finished.

There’s a series of indicators on the front panel to show the sampling rate of the incoming signal, including ones for standard and double-speed DSD.

We’re not particularly taken with the DAC’s ‘spike and cup’ feet arrangement, though. It allows the Korg to slide around on our desk every time it’s used. Annoying.

This DAC – once you’ve loaded the dedicated PC or Mac software driver – can be used with a music player like iTunes, but it makes more sense when it’s used as intended with Korg’s AudioGate. It’s only then its DSD capabilities can be exploited.

With this firmly in mind we try DSD files of what is arguably Stevie Wonder’s finest album, Innervisions. Living For The City is as good a place to start as any, and the Korg does pretty well.

There’s a likable fluency about the sound and a good degree of insight. Stevie’s vocals are delivered with energy, and the Korg sounds composed and in control even when the music gets busy.

Moving onto Lorde’s Pure Heroine (24-bit/48kHz) and the DAC’s solid punch and midrange clarity come to the fore.

The sparse production works well with the Korg’s clean presentation and we’re struck by the balanced tonality – no part of the frequency spectrum gets undue emphasis.

These positive qualities are apparent regardless of whether we play a CD rip of The Hobbit OST, a 24-bit/176.4kHz version of Michael Jackson’s Thriller or a low-res 192kbps version of Eminem’s Mockingbird.

That’s not to say the DS-DAC-100 is perfect. Despite its obvious talent, we’d like more expressive dynamics. At the moment it sounds just a little reined in, so music isn’t quite as engaging as it should be.

Similarly, rhythmic drive could be just a little more surefooted and forceful. Put these two shortcomings together and the result is a sound that is admirable for its insight and balance but doesn’t manage to entertain as much as it should.

Despite its far lower price tag, HRT’s microStreamer is a serious rival to the Korg in terms of performance.

It’s got more expressive dynamics and crisper timing, though lacks the Korg’s sonic solidity. Resolution is limited to 24-bit/96kHz too.

Of course, if DSD replay is important to you, the Korg remains the choice.

The AudioGate software is easy to use, but our early sample of the software was glitchy. Hopefully this will be sorted out soon.

This is an interesting unit. Performance with conventional high-res recordings has appeal but is bettered by cheaper alternatives.

Whether you should buy one hinges on how much you value DSD replay.