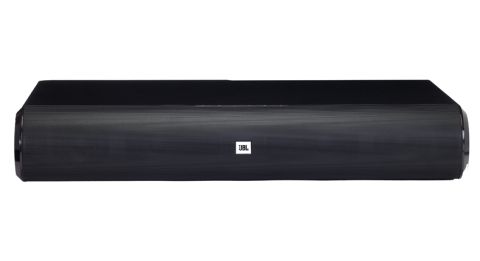 Delivering a good sound at an appealing price, this JBL is worth a punt

Top marks to JBL for consistency. Its debut soundbase - the aptly-named Cinema Base - largely mirrors its soundbar equivalent (the SB 350) in the company’s new range. The SB 350 got four stars and now the Base follows suit, possessing a similarly decent sound, rugged build and smart design.

Priced somewhere in the middle of our two Cambridge Audio TV2 (£200) and Canton DM 75 (£450) Award-winners at a rather tempting £300, it’s pretty good value, too, when you consider its strong performance.

Big, dynamic and excellently detailed, its sound is easy to buy into – not least for the action-movie junkies among us.

We unwrap and spin our new Godzilla Blu-ray, throwing the JBL straight into the thick of the action. As the chaos gets underway, it’s immediately clear that the Base’s dual 9cm woofers don’t hold back.

As the MUTO breaks free from its containment, its stomps bear the heaviness and depth we’d expect from a dedicated subwoofer in a budget speaker package. The bassy sound is floor-rumbling as it reverbs around the room. It can be a little overpowering, mind, so we’d knock it down a few notches to get the best sonic balance.

The Cinema Base is capable of volume that’ll make you sit right back in your seat when Godzilla growls, and its big, enveloping soundfield does wonders to draw you into the film’s havoc and keep you there – even without JBL’s surround-sound mode turned on.

Partner that with headstrong dynamics and a solid delivery and you’ve got a truly engrossing performance.

Our praise subsides momentarily when it comes to the midrange. It feels a bit restrained. Though the Base trumps the cheaper Cambridge Audio TV2 in some areas (dynamics, for one), mids aren’t as clear or well projected as they are through the TV2.

Dialogue is weighty and reasonably expressive through the JBL – you can hear the exasperation in Bryan Cranston’s voice as he shouts at officials – but in lengthy dialogue-heavy scenes, you wish voices were that bit more defined.

Treble stays duly behind the brightness threshold for the most part, but we’d like more a touch more definition and insight at the higher frequencies.

The JBL is a solid performer with music, its handling of a movie track paralleled in a musical setting. It laps up the meaty bassline in Daft Punk’s Around The World as we stream it over Bluetooth, and has the attack and rhythm to get your foot tapping.

We admire the effort JBL has put into aesthetics, even though the result (shiny edges on a matt-black chassis) is muted. The curved front grille saves this from being ‘just another’ rectangular box, too.

JBL says the Cinema Base is designed for up to 60in tellies, as long as the TV’s stand doesn’t exceed the unit’s 60 x 40cm size.

The Base has an uncommon trick up its sleeve: a USB charging port (not an input) means you can revive your smartphone or portable while, say, watching a movie.

Also picking up points for practicality is the placement of the optical and 3.5mm inputs and HDMI ARC output, around the back. There’s plenty of room around the sockets for owners of chunky cables.

The only blip in design is the feeble credit card-style remote, which is all-too easy to lose down the side of the sofa.

JBL is one of many brands to channel its soundbar expertise into the burgeoning foray of soundbases of late, and the Cinema Base is a decent first effort by the company.

There’s little to fault with design and plenty to applaud with the sound. It might not be the last word in clarity or detail (up top), but its weighty, dynamic presentation makes it an appealing proposition for anyone looking for a decent upgrade in sound. At this price, it demands a listen.