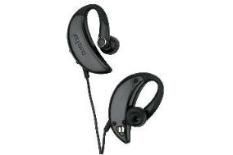 For all their fanciness, the Jaybirds don't come close to sounding like value for money

There's no other way of putting it: the Jaybird JB-200s look weird. They look like earpieces worn on the bridge of the USS Enterprise.

You'd think that once in place, they'd stick out almost as much as Mr Spock's ears. Surprisingly, they don't. Fitted correctly (which can take a couple of attempts) theses stereo Bluetooth headphones look remarkably discreet.

On top of the right earpiece are controls for power, volume and skipping tracks. They're quite fiddly though, and require a firm press.

The JB-200s come with their own carry case docking cradle; a full, two hour charge is good for around five-and-a-half hours of music playback.

Unfortunately, the Jaybirds don't have much sonic ability. The Foo Fighters track My Hero lacks dynamics and sounds flat. You can hardly hear the presence of the band's kick drum.

It doesn't take long before the Jaybirds' flat delivery becomes pretty tiresome. Wireless headphones are a great idea but we'd take the sound quality of wired headphones over the convenience of the JB-200s any day.