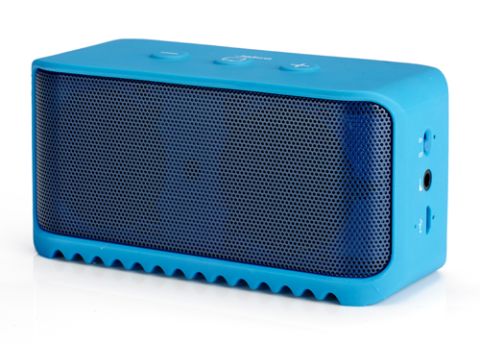 A small speaker with big sound, it offers plenty of volume but leaves us wanting when it comes to sound quality

The Jabra Solemate Mini gets its name for two reasons: one, it’s the baby of the three-strong Solemate speaker family.

Second, because of its grooved, trainer-inspired ‘sole’, which aims to prevent bass vibration from distorting its sound.

It’s dinky, but don’t let its size fool you, as it’s a sturdy little thing – tough enough to survive a rough ride in a bag thanks to its rubber casing. It’s dust- and water-resistant too, meaning it should handle all conditions.

There are three large buttons on the top face of the speaker for controlling pairing and volume, and along the right-hand side you find the microUSB charging port, 3.5mm input and power switch.

There’s a near-field communication (NFC) spot on the left hand side for one-touch Bluetooth connectivity with compatible devices.

If you turn it over you will find a handy storage spot for the included 3.5mm audio cable, snaked into its grooved base.

It connects via Bluetooth version 3.0 – not the up-to-date 4.0, mind, which would improve power efficiency – but the Jabra has an eight-hour battery life, which should be ample.

Pairing is simple. If you’re not able to use the NFC functionality, you can do it the old fashioned way by pressing the central button on the top of the device, which also doubles as a call/answer button when using the Mini as a speakerphone.

Be prepared though, for the Jabra comes with some rather loud, and cheesy, voice commands.

Fortunately, you can turn these off by holding down the ‘volume down’ button while turning the Jabra on.

Two drivers and a single bass radiator are in charge of the sound, and do a good job at squeezing a big sound out of a small unit.

If you push it to its top volume, you lose clarity and organisation for a very raw sound.

Dynamically it becomes squashed and recordings sounds messy and unrefined, so it’s a much cleaner sound and more comfortable at mid-volume.

The Jabra tends to be bass forward, dishing out plenty of low-end punch with most recordings, which keeps the speaker from sounding thin or unsubstantial.

The pounding drums in Florence and the Machine’s Dog Days are Over hit with impressive weight for such a small speaker, but ultimately lack the refinement and control we’d like. There’s a hint of radiator rattle too, most noticeable in quieter tracks.

Take your bass low, and the speaker’s DSP (digital-signal processing) kicks in to stop the speaker distorting.

Play Lil Wayne’s A Milli and the rumbling deep bass notes heard on better speakers are almost lost. Bass fans will want to look elsewhere – perhaps to the Sony SRS-X3.

The Jabra probably sits most comfortably in the midrange, so vocal-heavy music and acoustic tracks sound good.

Tori Amos’s Trouble’s Lament sounds clean, well balanced and listenable, if dynamically flat. Everything sounds as though it’s at the same volume, with no real difference between loud and quiet sections of a track.

We do have to remember what sort of product we’re dealing with here though, and at what price tag. For the money and its size, the Jabra does a decent job.

But we still can’t help wanting more from it. Edge the volume over midway and things start to lose clarity and organisation.

The Jabra’s outright volume is impressive, but it never manages to shake the restrictions of its size, always sounding like a small speaker being forced to go loud.

If you are on a budget, though, the Jabra is worth a look, as long as you’re happy to accept its restrictions.