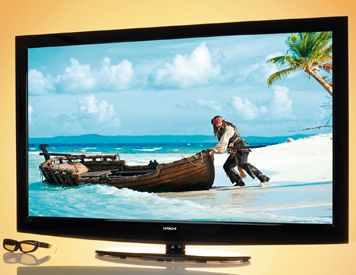 About time we got another Hitachi screen through our testing rooms, then – and, happily, this L46VG09 is a brand-new, hot-off-the-presses 2011 model that is only just arriving in Argos stores up and down the country.

£1200 put Hitachi’s way buys you a big, glossy and rather nondescript TV.

It’s perfectly adequately built and finished, has its active 3D transmission gubbins incorporated into the screen and is supplied with two pairs of USB-rechargeable 3D glasses.

The glasses themselves are light enough in situ but feel robust enough to survive being sat on, at least the first few times.

Lacking in serious specification
There are some specification omissions, mind you. The Hitachi does without any high-definition TV reception, and you can forget about any kind of ‘Smart TV’ functionality – the ethernet connection allows access to media on your home network, but not to the outside world.

Elsewhere, the VG09’s four HDMI inputs should be plenty, and there’s ample lesser connectivity too.

The remote control is big, though no easier to navigate for it, while the on-screen menus don’t offer all that much adjustability (none at all, in fact, where backlighting is concerned).

Still, that makes for pretty rapid set-up – though it would be quicker still if the remote control was at all responsive.

As far as TV reception goes (which isn’t that far, of course, compared with other screens), the Hitachi gives a reasonable account of itself.

Images are on the soft side, certainly, and are short on detail, but contrasts are punchy and white tones stay nice and clean. Motion is handled well in all but the most trying circumstances, too.

Edges are a little coarse, though, and complex patterns can shimmer and crawl – and the backlighting is all too ready to beam noticeably from all four corners.

Matters improve appreciably with a switch to Black Swan on Blu-ray.

Edges tidy themselves up, the colour balance is convincing (particularly with skin-tones) and motion is a deal more stable.

Black levels are good, as is low-light detail, but the Hitachi still can’t rid the most testing scenes of a smattering of digital noise.

3D content is stable with all but the most rapid motion, but it’s quite dim (despite the backlighting blithely announcing itself) and struggles to describe objects in the foreground with any confidence.

This lack of near-field focus contributes significantly to how tiring watching a 3D movie can be.

Noticeably poor sound
Throughout, the sound the Hitachi delivers is thin, coarse and sibilant – quite possibly the worst we’ve heard a flatscreen sound.

And, lest we forget, there’s some pretty stiff competition. Some economies are entirely false.

The L46VG09 is a most affordable screen, but nothing like so cheap that we’re able to gloss over its spec and, crucially, its performance shortcomings.