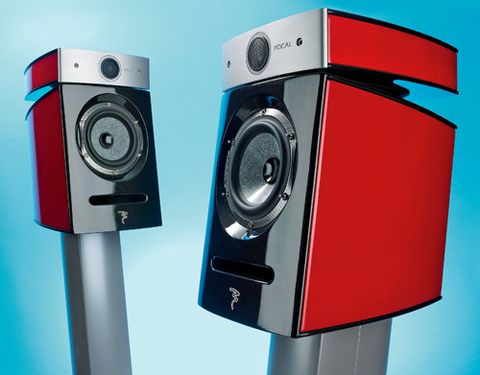 When it comes to levels of insight, little at this price even comes close

Spending almost eight thousand pounds on a pair of speakers, let alone standmounters, takes some justification. There’s only so much a wooden box – no matter how nicely made – and a set of drive units can cost…

Yet, as we sit in our listening room, finishing yet another long session with Focal’s Diablo Utopias, we’re convinced. Nobody has to spend this kind of money, but, if they can, we haven’t heard a more capable alternative.

Of course, there are some things a 43cm tall speaker sporting a 16.5cm driver can’t do. We have no doubt there are similarly priced speakers, invariably floorstanding designs, that can dig deeper in the bass and deliver a more authoritative sound. They’ll probably go louder too.

Yet, if you want a great sound in a small to medium space (say below 4.5m x 4.5m), this standmounter is mighty hard to beat if transparency and articulation are paramount.

These Focals deliver a spellbinding performance packed with detail, dynamic nuance and agility. Feed them the likes of Johnny Cash’s version of I See a Darkness and the speaker end of our listening room disappears, leaving just Cash’s rich, time-worn vocals to take centre stage accompanied by one of the most realistic renditions of an acoustic guitar we’ve heard.

Such harmonically rich instruments are massively difficult to get right, but these standmounters manage that trick with everything from trumpets to pianos.

These speakers are also spot-on when it comes to nailing the tone of instruments and voices. There’s no undue emphases to make things sound more exciting, and certainly none of the overt richness in the bass that many standmounters use to sound bigger than they actually are.

The result of this balanced approach is that these Focals take a little time to gain your affection. Make no mistake, they sound good straight out of the box and get better as they warm up. But, they don’t grab attention in the way, say, Neat’s terrific Ultimatum XLSs might.

It’s only when you start comparing the Focals with other high-end designs – we used a variety, from ATC’s SCM 50s, Monitor Audio Platinum PL300s to Tannoy’s Definition DC8s – that it becomes apparent just how good they are.

In terms of clarity and resolution they trump anything we’ve heard at this price, and it’s all rendered in a natural, unexaggerated manner.

Unlike those Neats, the Diablo Utopias don’t emphasise the rhythmical aspects of music. However, listen closely and you’ll find the information is there, though a little underplayed.

Stereo imaging – once these monitors are bolted to their dedicated stands and positioned away from walls – is terrifically stable and precise.

By high-end standards these speakers aren’t massively fussy about positioning or partnering equipment, but you will only get out what you put in. Put some effort into optimising both and you’ll be rewarded with a notably better sound.

Despite the innate limitations of their size, these speakers will happily deliver the dynamic shifts of The Dark Knight Rises OST with confidence, keeping everything under control even when the music becomes demanding. They’ll even output high volume levels with a rarely found sense of composure too.

The story is equally positive whether you listen to Drake’s Under Ground Kings or Debussy’s Clair de Lune. Essentially, if you want to know exactly what’s in a recording the Diablo Utopias will reveal it all, warts and all.

This performance isn’t accidental: there’s serious engineering in these speakers. The technical highlight is undoubtedly Focal’s Beryllium inverted dome tweeter (below). Beryllium is two and a half times lighter than titanium and seven times more rigid with the same mass, making it a fine tweeter material.

Beryllium is rarely used in hi-fi because of difficulty in manufacturing caused by its toxic nature. But Focal has put a great deal of effort into overcoming these issues, and ended up with a wonderfully clean and detailed performer.

Unlike many rivals – who buy in drive units from OEM suppliers – Focal designs and makes all its drivers in-house. This allows the company to optimise each unti for the speaker it goes into. This is one of the very best tweeters that money can buy.

The tweeter is housed in a separate cabinet which sits, angled, on the mid/bass enclosure. Separating the drive unit enclosures this way has benefits in reducing unwanted mechanical interaction, and angling focuses the sound, helping with integration – an area in which these speakers excel.

That high-tech tweeter is matched to an equally impressive mid/bass unit. The 16.5cm mid/bass features Focal’s trademark ‘W’ cone – a composite construction of glass fibre and foam that is specially configured for light weight, rigidity and good damping qualities.

The mid/bass’s motor system is special too, having a clever magnet arrangement that’s claimed to optimise magnetic power and minimise any losses.

The solid cabinet is finished to a high level, too – and Focal is happy to paint it pretty much any colour you want, which should keep the house-proud happy.

Put it altogether and you have some exceptional speakers. Yes, the Diablo Utopias cost a lot, but when it comes to performance you get what you pay for.