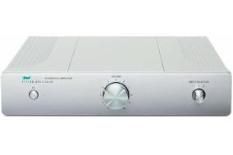 Not short of appeal, but it looks a little pricey for the quality of the sound.

The name isn't the only unusual thing about this little amp. Flying Mole's speciality is digital amplification, and that's the real story behind this minimalist integrated.

Digital amps tend to be small, light and efficient, and that's what the CA-S10 is, while outputting an impressive 100w per channel.

Compared to the last Flying Mole amp we reviewed – the £500 CA-S3 – this is a more convincing effort. Yes, this CA-S10 also lacks a remote control, but at least it now has three inputs rather than just one.

It also has a proper set of loudspeaker terminals, not the bare wire ones on the junior model.

Build quality is excellent, almost jewel-like, in fact, and the controls work with a crisp precision that most rivals can't match.

The good news continues with the sound. It's a clear-sounding amp. Instruments and voice are rendered with impres-sive precision and little overhang.

Detail is decent, too, meaning the amp can unravel something as com-plex as Orff's Carmina Burana without sounding confused.

The CA-S10 isn't perfect. It lacks a degree of body and natural warmth, so performances sound less natural than they should. Dynamics could be more expressive, which would make the impact of a stunning singer like Nina Simone stronger.

These shortcomings aren't huge, but up against talent like the £800 Cyrus 8vs2 and £650 Roksan Kandy

L.III, they're enough to make the Flying Mole look a little pricey.