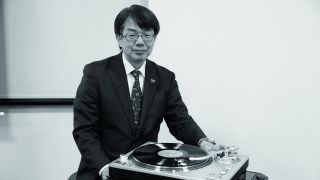 Tetsuya Itani is arguably one of the most influential consumer electronics engineers ever. He started working as an engineer at Technics way back in 1980 and was involved in the development of the company’s first CD player, the SL-P10, two years later.

Since then he has been instrumental in the design of various laser disc, DVD and Blu-ray players for Panasonic (Technics’ parent company), and helped to develop the HDMI standard, before returning to the premium audio brand for its relaunch in 2014. Itani is currently the chief technical officer and chief engineer for the company. What Hi-Fi? travelled to Japan to meet Itani to find out more about him.

What Hi-Fi?: Can you recall what originally made you interested in hi-fi?

Tetsuya Itani: It was down to the table-top stereo system my father bought in 1968. I enjoyed Japanese pop music with it and that made me interested in sound.

WHF: Can you remember your first hi-fi system?

TI: I got my first hi-fi back in 1975. I remember that I made all the components by hand. The preamp used integrated circuits from Toshiba, while the power amplifier was valve powered with NEC 50CA-10 tubes. Technics drive units were used to make the speakers.

WHF: What was your first job in audio/engineering?

TI: I joined Matsushita Electric Industries in 1980, and my first job was on the development of a CD player prototype for the sub-brand Technics. The first CD player produced, a Technics SL-P10, was launched autumn 1982. At that time I was a software engineer for the CPU (Central Processing Unit), so I held many patents to do with CD player control protocols.

WHF: What were the reasons for Panasonic stopping the Technics brand worldwide in the early 2000s?

TI: There were two main reasons. Firstly, the market moved to the widespread use of compressed music, so the focus of the sound products migrated from hi-fi to casual portable. Technics struggled because it wasn’t very competitive in this sector. At the time the decision had also been taken to focus on the Panasonic brand and drop all the others the names used at the time. We stopped the National brand in Japan the same time as Technics.

WHF: Why did Panasonic then choose to revive the Technics brand in 2014?

TI: Technology evolved and hi-res audio became widely available. We found that people had began to reappraise sound quality and get more interested in hi-fi again. In addition, around that time, we developed our Class D amp technology, which was good enough to be used in hi-fi amplification.

Also, Panasonic’s ‘one brand’ policy changed and senior management agreed that the Technics name and its history was better suited to the specialist audio sector than Panasonic.

WHF: What do you see as the core values of the Technics brand?

TI: Traditionally, Technics’ brand values have been based around technical achievement and development. The company was established with numerous world firsts in technology and many leading edge products. Today, things have changed with people understanding that sometimes sound quality is different from technology. Therefore at the relaunch of Technics we knew we would have to concentrate equally on sound performance and technological application.

WHF: What makes Technics different from other brands?

TI: We’re different in many ways. On the technical side, we are part of Panasonic, and can use a wide range of technologies and materials cultivated through AV and electric components development in our company. For marketing, we have a global marketing network, which helps our distribution and customer service.

We are also in a good position because of brand recognition, which helps us to communicate and corroborate with the music industry. We work with the Berlin Philharmonic and Abbey Road Studios.

WHF: Why did you choose Class D amplifier technology for the relaunched Technics amplifiers?

TI: Basically, we think digital processing has advantages over analogue when it comes to containing noise and distortion. Many people still believe that digital amplifiers don’t have the relevant bass power or can sound overly bright. We’ve been researching digital amplifier circuitry since the year 2000 and found the main problem is how to contain jitter (the frequency fluctuation of the clock signal). Jitter in the sample rate converter is fatal to the sound quality of a digital amplifier.

Through study, we developed a low jitter sample rate converter that is the core of our JENO engine around 2012. From there we gained the confidence that we could make a hi-fi grade amplifier with our D-amp technology. In addition, we had developed LAPC. This is a DSP-based technology that improves the matching between the amplifier and speakers. We could not have done the same job with analogue processing.

After studying electronic engineering, Itani joined Matsushita Electric Industries’ Technics division in 1980 as an engineer. He helped develop the first Technics CD players before working on Panasonic’s laser disc, DVD and Blu-ray players. When Technics was relaunched in 2014, Itani was appointed to the position of the brand’s CTO/chief engineer.

WHF: Could you outline the process when developing a new product?

TI: The trigger for the start of development is user requirement. Sometimes direct requests from customers kick off the project. The SL-1200G and SP-10R/SL-1000R turntables are prime examples of this. But usually, our product planning team does a market survey to decide whether a project goes ahead.

Planners, engineers and marketing people meet to determine the new product’s details, such as its time scale, features and price. Once we start work the engineering team, we will check both functionality and sound quality at every stage. Also compliance to regulations will be confirmed.

For Technics, good sound quality is an important factor. We have a Sound Committee that checks the performance level at every stage, and things only continue when they are happy. The Committee is made up of the CEO, Miss Ogawa (a trained pianist), myself as well as other two other members of our team in Japan.

We also have another committee from Europe (Germany and the UK) to check the sound quality. Before mass production begins we send samples to our global distribution network to get approval.

TI: Streaming will be the major sound source in the long term. It is very easy to use, and will continue to get better. But I also think people want the pride and joy of owning their music. Therefore I think streaming and vinyl will co-exist.

TI: Both are important. At the early stages of product development measurement takes priority. After getting to a certain level of technical performance we tweak the sound by listening. In general such tuning doesn’t degrade the spec.

WHF: What is your overall favourite Technics product?

TI: It has to be the new SL-1000R turntable. Its new direct drive system can produce a quality of sound that I think nobody else has achieved. This quality is achieved because of a high precision of rotation and by minimizing the amount of resonances in every part of the player.

TI: It’s hard to choose just three! I like classical music by Beethoven, Mahler, Brahms, Bruckner. Also I like rock music by the Beatles, Led Zeppelin. Also I like The Carpenters and many Japanese artists.

WHF: What is the future of hi-fi?

TI: I think there will be two directions. In the mass market I think the products will be smaller and less visible, maybe hidden in the wall or ceiling. Simplicity of use is important and streaming services will dominate. For hi-fi enthusiasts, things will remain much as they are. These people enjoy tweaking the sound quality of their system as well as listening to music. Physical media like vinyl will remain in this field.