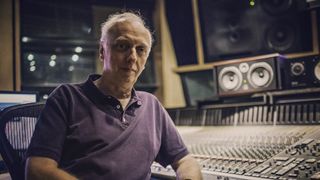 Eric Kingdon has been described as "the ears of Sony".

He is responsible for the sonic tuning of the company's products to ensure they perform optimally. Since joining the brand in 1984, Eric has been directly involved in developing many of the great components that have followed.

From Award-winning stereo amplifiers to class-leading speakers and Blu-ray players, there's little that he hasn't tackled over the years - and that's just one reason he was a worthy winner of this year's What Hi-Fi? Outstanding Contribution Award.

We spoke to Eric about how he got started in the industry, how Sony design a new product, his favourite products of all time, and plenty more besides.

What Hi-Fi?: What originally made you interested in hi-fi?

Eric Kingdon: I was quite young and I had an aunt who had bought an HMV Stereomaster for £49 19s 11p! She had it delivered to the sitting room at the back of her small shop and played it to me after school. It was the first time I remember hearing anything quite like it and I simply had to hear more.

A few days later I went with my father to visit a friend of his. He had a Garrard SP25, Armstrong 521 amplifier and Wharfedale Denton speakers. It was the first time I had heard a stereo system and experienced some kind of real stereo sound. I was hooked.

WHF: What was your first hi-fi system?

EK: My first hi-fi system was a Bang and Olufsen Beogram 1000 turntable, Beomaster 1000 receiver and Beovox 1200 speakers. I loved the design, so did my parents (which was a compromise to get a hi-fi system instead of a radiogram). But soon, I wanted to get more and improve the sound, so a Garrard 401, with SME 3009, Shure cartridge, quickly followed with various amplifiers and speakers… and that is a story in itself.

I was fond of that first system and so over the years collected and restored a host of different models and equipment. You always think, ah well I can sell it, but you never do, so the collection has continued to grow, along with all the music!

WHF: What was your first job in audio?

EK: Believe it or not, my first job was in a music and hi-fi shop, working Saturdays at first, then on holidays in my early teens. Luckily I was tall and looked older, so was entrusted to help out upstairs in the hi-fi department. It was only small, but like an Aladdin’s cave. Ah, the brands they stocked! I was working extra jobs and even doing paper rounds to pay for my hobby (I sold the piano I had learnt to play on). Like many people, I tried building my own kit, sometimes with a little success.

After university, I had landed a research job and put it on hold to try my hand at working in a real hi-fi shop. I thought it will either rid me of this passion or steer me in another direction. It wasn't well paid, but taught me so much about the business and most importantly the customer. I kept studying and attending courses, events and listened and listened.

WHF: How did you end up at Sony?

EK: With luck, a tech job appeared in a trade magazine. After three interviews and a practical exam, I started working for Sony. I had admired the products for so long, so was lucky to join at the start of a great age of product and technology development.

WHF: What do you do at Sony now?

EK: I have a variety of responsibilities in technology development and marketing. I’ve been lucky to have had the responsibility to work closely in the launching of new formats along with all sorts of products in the pure audio and AV sectors.

I’ve been part of the design and development of a range of UK speakers and the sound tuning development of amplifiers, receivers, CD/SA-CD players, Blu-ray and even a turntable. I’ve been privileged to know and work with some world-class engineers.

WHF: What’s the process when developing a product?

EK: It really depends on what type of product and what the aim is. The balance between cost and performance is usually a tough one. Many devices are software-led and the silicon can take a long time to develop. It’s important to always consider the influence that software has on sound, during development particularly. Patience, an open mind and a lot of listening is essential, of course.

WHF: Which products are hardest to develop?

EK: It can depend on the model or type, and often application of a new technology which is developed separately. If you had asked me this at different points in my career, I would have replied differently and said CD players, later AV receivers and so on. Sound is subjective and the challenge I believe is to understand what the listener wants, in a way you have to adopt their ears sometimes and of course their music.

I believe I have never stopped learning, so the hard products to develop, will likely keep coming.

EK: Good question! Both have their place, but the weighting is definitely not always the same. I have always believed in trusting your ears as the best evaluation tool. But commercially, you need measurement and objective criteria. It can help you understand what’s going on and why and how some things work during the sound tuning phase. But ultimately, the final sound is the most important thing to me.

EK: Very difficult to say, there are many of them. I guess it would be the Sony PS-X9 direct drive broadcast turntable, along with the XL-55Pro cartridge and XL-88D cartridge. The PS-X9 I believe is an unsung masterpiece of turntable design with a 38cm platter weighing nearly 6kg. It had colossal torque.

The XL-55Pro is a MC design with an innovative coil wound like an ‘8’ and a beryllium, aluminium and carbon cantilever, supplied fitted in a special headshell. The XL88D is very rare and features a diamond cantilever.

WHF: Which rival product or technology do you admire most?

EK: There are many great products out there and tough competition is good for everybody. If I had to pick a technology I admire, it would be an electrostatic speaker, such as the Sound Lab 745. I first heard Sound Lab years ago, unforgettable! For an ‘ear-speaker’, it would likely be the Stax Lamda.

WHF: What’s the first piece of music you bought?

EK: Mona Lisa by Nat King Cole – my father loved him and I became a fan. Now just listen to the great man on Analogue Productions SA-CD and vinyl singing, When I Fall In Love. It’s simply superb.

WHF: What are your three favourite classic hi-fi products and why?

EK: Phew! There are many of them, but you asked for just three, so they'd have to be: the JBL Paragon, for many reasons, not least the remarkable design and construction. It was the longest running JBL speaker and appeared, I think, in 1957 – just younger than me – and required over 100 man hours of finishing. There’s much more to tell, but my last encounter with a Paragon was sitting cross-legged in a small shop in Tokyo listening to classic vinyl jazz. It’s one of those classic speakers that can transport you back to the recording period and I love it.

Then there’s the lovely Quad ESL 57. So much has been said about this - just listen to the sound of a human voice and you will know why, and two pairs stacked are quite something, believe me I’ve tried them.

Third is a tie between the Akai 4000D – a great little reel to reel recorder, which I had to wait a long time to acquire as it was out of reach when launched at £69. I have to also add the original Beosystem 5000 from the late 1960s and early 70s. It’s an exhibit in the museum of modern art and featured in A Clockwork Orange.

WHF: What was the first album you bought?

EK: That’s so long ago, I think it was a Decca recording called Tchaikovsky In Phase 4 Of The 1812 with Bob Sharples conducting the London Festival Orchestra. I believe it was originally released around 1963.

WHF: And your three favourite albums?

EK: Picking from so many is not easy, but let’s start with the RCA Living Stereo recording of Scherezade with Fritz Reiner. I can’t help but listen in awe to this performance and its sound quality hasn't dimmed one iota in the passing decades.

Then there’s the Sheffield Lab Direct cut LP of The King James Version. Check out Corner Pocket, Harry was reported to have said he never sounded so good. It has everything you would expect and on a good system is as real as you could expect.

Finally, there’s the Solti Ring Cycle, an epic musical journey and a classic. My first encounter with this was the complete Decca vinyl set, followed by  the CD, then remastered, then released with the John Culshaw book and hi-res files. But even better, there was an Esoteric SA-CD boxed set also released and finally, something very special. Stereo Sound Japan issued the Ring as a flat transfer from the analogue tape to DSD and SA-CD with green coating.

Simply magnificent, the Immolation Scene will make the hairs on your neck stand up. One day maybe I will compare all of them and write a review!

WHF: What are your most used test tracks and why?

EK: It depends on the product. We use many different tracks, according to the sound evaluation required. I use all sorts of music and genres, such as Sophie Milman, Jem, Fazil Say, and I always keep a close eye on what people recommend. It doesn’t have to always be the latest, it just has to work.

EK: This depends on the listening room in question. We have a number which are tailored for every of product. But to give you an idea, I’ve used B&W 800 series Nautilus, Accuphase and many others.

WHF: What is your system at home?

EK: Honestly, it depends on what I want to listen to. With access to good and classic equipment I’ve bought, I tend to change some of the systems several times. Currently, it’s the PS-X9 turntable with XL-55Pro cartridge, TAE-R1 pre-amplifier, Pass Lab Aleph 1.2 monoblocks and SS-AR1 speakers for two channel music. For AV it’s something different and then if you’re in a classic mood… something else.

WHF: What sonic qualities would your perfect product have?

EK: You can answer this in many ways, but put simply, the reproduction of sound in a completely natural way – and importantly something you enjoy listening to.

WHF: What’s the future of hi-fi?

EK: The future, as they say, is an undiscovered country. Who would have thought a few years ago vinyl would have the resurgence it has enjoyed? Recently, I even saw a flyer for a ‘Cassette Day’!

All sorts of developments will continue to increase the quantity and quality of services, with access to music via downloads and streaming remaining important. In a busier world, noise cancelling technology and products will expand. Portable devices and the connection systems offering new opportunities as well. Hi-res will find more fans, as will voice control and more immersive audio experiences.

Thanks to the quality and diversity of music releases and reissues, I think we live in a ‘golden age’ of physical media right now. Let’s make the most of it.