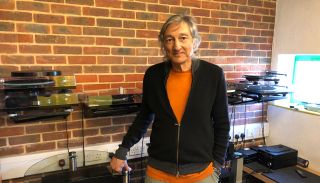 Rega Research is a bustling hive of activity as we visit its factory in Southend-on-Sea, Essex. Thanks to a long string of excellent products (and the vinyl revival), business is good and the factory has expanded accordingly.

Since our previous visit, back in 2016, there are now newly-built production areas and increased warehouse space to cope with the higher output, as well as a smart new canteen to accommodate the increasing staff numbers.

Rega makes everything from drive units to moving coil cartridges on site, with the bulk of production devoted to its Award-winning turntables, amplifiers and tonearms. Now one of the UK's biggest and most successful hi-fi manufacturers, its beginnings were far more modest, as co-founder and designer Roy Gandy explains...

WHF: What made you interested in hi-fi?
RG: I don’t think I’ve ever been interested in hi-fi as such. The concept of high fidelity seems a bit strange to me, but I am passionate about music. I’m a qualified mechanical engineer and view the bits of hi-fi equipment as tools.

What was your first hi-fi system?
I didn’t have enough money to buy my own hi-fi, so I ended up making most of it. My first system was made up of homemade speakers and a turntable I’d designed myself. That first turntable was made from parts that I salvaged, scrounged or bought at a discount because they were rejects.

I built the amplifier using parts from an old valve radiogram. It tended to hum and buzz, so I ended up buying a Leak Stereo 70. It didn’t take long to realise that it didn’t sound very good.

How did Rega come about?
I was working at Ford Motor Company, training to be an engineer as well as making and selling speakers in my spare time. Many of the customers asked me about a suitable turntable to use with them but I wasn’t happy with the quality of the available decks. I decided to design my own and that became the Planet.

It wasn’t long after that I came in contact with hi-fi dealer called Tony Relph. He saw the turntable and suggested that we establish a company to manufacture them. We both put in £1000 to get things started. Rega was registered on 1st July 1973 and got its name from the first letters of our surnames. That company ended up being Rega Research Limited.

What do you think makes Rega different from its rivals?
It might sound smug or arrogant, but I don’t believe that Rega has rivals. We don’t think like that. We wouldn’t see a competitor as someone who might take some of our market. There isn’t anyone that does that.

Only Pro-Ject makes broadly similar quantities to us, but we’re happy for them to be there. We have very different types of distribution and marketing. I’m sure they work very differently from us, and have much wider range of retailers.

What’s your favourite Rega product?
It has to be the Planar 3 and the arm, though those choices are little selfish as I designed them. More recently, the Aura phono stage is stunning. Our electronics engineer Terry Bateman has done something incredibly special with that. I had very little to do with how that product turned out.

How did the Planar 3 come about?
My first turntable was the Planet, and that sold because it looked different, rather than on sound quality. I worked hard to reduce motor noise on that. After a while, I started getting annoyed with the performance.

Its main problem was the platter – it used three metal discs to support the record, but they didn’t do it well enough. I ended up using a glass platter, which was a big step forward. It’s something we still use today.

The 3 had an even lighter plinth than the Planet, something that helped to reduce noise. I had long been convinced that a low mass plinth and high rigidity were vital for good sound. The Planar 3 was the first time that we looked properly into improving the performance of a turntable.

Do you think the current vinyl revival is a long-term trend?
We were asking the same question in 2011, so, I think it's time we stopped. The resurgence started around 2009 and that was the question all the time – is it a blip?

Even then, we decided to put our research money into turntables rather than CD players, so it’s not been a blip. Sales have been steadily growing. It may be levelling now, but I don’t think it’s going to disappear anytime soon. Why would it?

Which areas of turntable design have the most room for development?
There isn’t just one thing. A turntable is a measuring instrument made up of lots of components. The success of a design depends on every single part being as close to perfection as possible. In our industry, people tend to focus on just a few areas, rather than looking at the whole.

Rega prefers to reduce plinth mass on its turntables. Why's that?
The plinth feeds energy into the record. Simple as that. Most of the unwanted real life energy comes from the plinth – it’s bearing noise and motor noise. The lighter the plinth, the less of that noise is fed in.

Will we see a Rega streamer?
We have a streamer module that works. It’s a small six-layer module that was done in-house and took about six months. In doing it, we learnt about the systems and how imperfect they are.

The licensing is a complex commercial situation. We learnt about the streaming platforms that exist and their issues and problems. It’s too much to deal with for us. There are plenty of other people doing it to an adequate standard. In my opinion, a hi-fi streamer isn’t needed, because we have computers that do the job at least as well, if not better.

Can you explain why Rega doesn’t like to use damping in its designs?
Damping is a simple engineering concept that turns movement into heat. You have to have the movement there to have damping. We don’t want that movement.

While it’s impossible to get rid of resonances totally, we can minimise them and spread them over a wider bandwidth to reduce their effect. We think this gives a better performance than just having damping.

Measurement or listening – which takes priority?
In engineering, measurement is necessary. You cannot make an engineering product without measuring. Being aware of your measuring equipment and what its limitations are is vital.

But we place a great deal of importance on listening too. Essentially, the products we develop are made doing both, and we try to have a correlation between the two.

What's your favourite non-Rega product?
I tend to be a critical person, so it’s hard to get me excited about products. But there some that I’ve been impressed with. The early Naim amplifiers sounded better than anything else I’d heard at the time.

The first arm that validated my engineering ideas was a Breuer. At that time, all the arms were going ultra light, ultra thin and people were trying to get down to half a gram tracking weights. Then a Swiss arm called a Breuer arrived using a big fat arm tube, so I was glad to know that I wasn’t alone in my thinking.

I do like the sound the Leak Stereo 20 amp makes under certain circumstances with certain types of music as well as the early Quad electrostatics (the 57s) with acoustic music. I also like some older JBL loudspeakers and the current  JBL K2 – they’re beautiful.

What kind of music do you listen to?
I find that a difficult question. For me, music is not about genre. I like something with melody, harmonies, the sounds of instruments played well and I really get off on performers that do things outside the realms of others. I like people mixing genres and doing unexpected things.

What's your system at home?
Whatever I’m working on. It’s a job, unfortunately. I don’t have a fixed set-up. Tomorrow I’m listening to different transformers and we’ll choose a system that helps us to do that best. We have to be flexible depending on what we’re trying to do. We can use a Planar 1 to do the job, or maybe the Naiad.

What sonic qualities would your perfect product have?
It has to be able to transmit the magic of special music performers that tends to get lost on almost every recording. I discovered that at the age of seven when I found live music contained something that’s not there when you listen to it on the radio.

12 of the best Rega turntables of all time