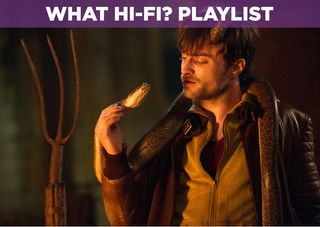 It's Halloween, which means scary movies. And with Daniel Radcliffe's latest film, Horns, you have one that's itching to bring out its dark side...

Based on the book of the same name by Joe Hill (son of Stephen King), Horns is about Radcliffe's Ig Perrish, accused of killing his girlfriend Merrin (Juno Temple) in a brutal attack. Convinced of his innocence, everyone around him is less sure and, when demonic horns manifest on his head (they just do), he realises he can get people to confess their secrets to him, putting him on the path of finding out who killed Merrin.

With Radcliffe playing the main role, his performance is the best place to start... and it's a confident one from the former boy wizard. Affecting a decent American accent, there's enough conviction in his rage to sustain your interest to the end, convincing when he has to strike the emotional beats and just about believable when it comes to the more physical moments (Radcliffe is a pretty small guy).

But there are some uneven moments along the way that make for a bumpy ride. Despite the ‘whodunnit’ premise, the cast of suspects is pretty small (we’d be surprised if you can’t figure out the who the killer is half-way through, if not the why), muting the suspense of finding the killer.

Some pacing issues also hinder the film and the use of Ig’s powers makes Horns feel a little bloated towards the end. There’s a flashback some way into the film that stalls momentum (and teeters on being dull), while Ig’s demonic protrusions wipe the memory clean of anyone he talks to meaning that the killer is revealed not once, but twice, making the ending repetitive and something of a slog.

Just to add to its list of problems, it’s tonally uneven too - aiming to strike a balance between romance and a stormy revenge story that director Alexandre Aja never really melds into a convincing whole.

Despite those marks against it, when Horns is good, it’s very engaging. Ig’s ability to extract confessions is good fodder for some character moments, especially between his parents and (the great) David Morse popping up as Merrin’s father, who reveal feelings to Ig that he’d rather not hear.

It’s in moments like these where the film becomes quite melancholic and emotionally earnest, and that works in the film’s favour more often than not. Is Ig more of a monster than he thinks he is?

It also has a wicked sense of humour as Aja and writer Keith Bunin have a lot of fun with Ig’s powers and even when some of the jokes don’t quite land; you can’t fault them for trying to be different from the herd of torture films and endless, humourless remakes that clutter the calendar.

There’s both good and bad in Horns; the good parts just about win out thanks to a confident performance from Radcliffe and some delicious nastiness along the way. Go in expecting not too much, and you'll be pleasantly surprised.