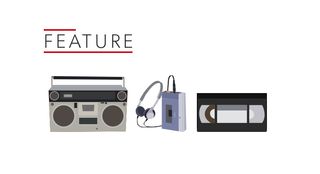 From turntables to tuners, speakers and more, there has been quite an evolution during those past 32 years: when our first Awards took place, who'd have ever envisaged the likes of Sonos, Spotify or smartphones, for example?

But with each step forward in hi-fi and home cinema, there's been a generation of AV products relegated to a dusty cupboard in our homes. So let us take a solemn moment to remember those Award-winners that are no longer with us...

"CD may dominate the news, but it can't match tape for price or versatility".

That may have rung true in 1989, but the decline of the cassette wasn't too long in coming. CDs started to rapidly take the place of the humble tape, which meant cassette decks such as the Aiwa AD-F270 (Best budget cassette deck, 1989) became all but redundant as the digital age of the 21st century was ushered in. (But, whisper it, there has been something of a cassette tape revival in recent years...)

If cassette decks were losing their place in an increasingly CD world, "tape personals" (or personal stereos before) appeared to hold their own for a little while longer thanks to their size and portability. The Akai PM-R2 was our pick of the best from 1985. But they too have long since been replaced by a variety of portable personal music players. Still, we're sure many people have fond memories of portable tape players, most iconically the Sony Walkman...

In the beginning, "CD personals" were seen as digital dinosaurs. Then, as 1992's Technics SL-XP505 shows, they became cool - and even "oozed sex appeal". Even if the £180 Technics came with a remote control.

Now, we've come full circle with portable CD players - everyone had a "Discman", right? - now the digital dazzlers of yesteryear. Our archives suggest the last such Award was handed out in 2004.

In today's currency, "portable" means something a whole lot different to what it used to. Now we tend to think of ultra-thin smartphones that slide effortlessly into our jeans pocket, or the expanding range of high-res music players from Sony, Astell & Kern and others.

Before the rise of the personal CD and cassette players, however, these were the portable devices that stole the show - such as the Sharp QT-27EE, yours for £78 back in 1985. Try getting that into your pocket...

MiniDisc first arrived on the scene in 1992, but had to wait a few years before a MiniDisc recorder was handed a What Hi-Fi? Award. The technology was introduced by Sony but, despite finding success in Japan, it struggled to gain traction elsewhere and faced a challenge from Philips's rival DCC (Digital Compact Cassette) format. And it was almost always up against competition from CDs, before MP3s, downloads and streaming arrived to all but block the way forward.

The Sony MZ-N10 was given the title of best MiniDisc Personal of 2003, thanks in no small part to its capacity to store, wait for it, 160 minutes of music on a single MD. As we said then, "digital music may eventually mean the end of MiniDisc, but for now it's given the ailing format a new lease of life". It was short-lived.

What you see here with the £700 Panasonic TX32DTM1 is the last ever Award-winning CRT TV, from 2005. It had been just two years beforehand that CRT had been the dominant TV technology at the Awards, with five of the eight TV gongs that year. How quickly things changed...

LCD and plasma TVs were very much in the ascendancy come 2005 and, despite still claiming to offer the best-quality pictures of the time, CRT's star was beginning to fade. After all, can you imagine accommodating such a hefty beast in your home nowadays? Of course now we're all about 4K and OLED, or preferably a combination of the two...

Introducing the Panasonic NV-HD605B - the Best Home Cinema Source of 1996. At the time, it was a steal at £400 and Panasonic had a track record for making desirable VCRs. The market for VHS tapes - having fought off competition from Betamax - lasted until the turn of the century, but soon found itself falling behind the more advanced DVD format.

DVD might have contributed to the demise of the VCR, but it probably wasn't expecting to be muscled out itself. But, with the arrival of Blu-ray, a more advanced video format sat atop the pile and 2007 was the last time a DVD player - the Marantz DV7001 - took a Product of the Year title. Of course, you can still buy one, but we've opted to guide you towards Blu-ray decks since the late 2000s. But tech waits for no man, which is why in 2017 we're all about Ultra HD Blu-ray...

We tried hard to remain upbeat - or, at the very least, agnostic - about 3D TV ever since it attempted to ride into the nation's living rooms in 2010 on the back of the success of Avatar in 3D at cinemas. But the public at large proved stubbornly resistant to its charms - certainly if those charms were only revealed when wearing a pair of expensive and less-than-stylish plastic glasses.

By the time we gave an Award to the tremendous Panasonic TX-P55VT65B (Best 55in+ TV, 2013) the game was almost up. We'd begun to see the first wave of 4K and OLED TVs, two technologies the paying public found much easier to get behind, and by the time CES 2016 rolled around most TV manufacturers were pretending 3D never happened.

But enough about the past, all eyes are now on Thursday 16th November and the publication of our What Hi-Fi? Awards 2017 issue...

A brief history of the What Hi-Fi? Awards in magazine covers