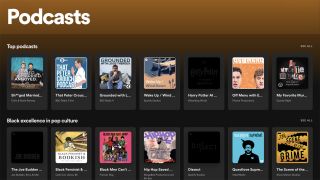 Welcome to What Hi-Fi?'s round-up of some of the best podcasts on Spotify, covering crime, history, sport, politics, comedy and more.

Podcasts are a superb way of keeping up with politics, hearing the most amazing undiscovered stories, expanding your mind, geeking out on your specialist interests and generally entertaining yourself – all while taking a break from staring at a screen.

As of 2019, Spotify has gone big on podcasts, buying up podcasting production companies and creating exclusive series for its 'Spotify Originals' platform.

Our best podcasts on Spotify list includes a mix of both Originals and podcasts which you can find elsewhere. It's packed with recent podcast sensations as well as podcast gold from the past few years and, of course, there's plenty of true crime.

(If you're after something more hi-fi orientated, then take a look at our choice of the best podcasts for music lovers.)

Now go and expand your minds, and don't forget to add any podcasts suggestions of your own in the comments.

Son Of A Hitman

Produced by Spotify Studios, this is a multi-part limited series hosted by journalist Jason Cavanagh. He conducts a real-time investigation into the murders, crimes, and conspiracies of hitman, Charles Harrelson, father to actor Woody Harrelson. It's not exactly your every day yarn. There aren't many episodes, so make sure you savour them.

Listen to Son of a Hitman on Spotify

Produced by Mundial Magazine, Giant is a short series Spotify Original podcast taking an in-depth look at the heart-warming and more honest stories of football, at a time when then game has become all too obsessed with money. Each episode is fairly weighty at an about an hour long, and they cover topics such as the Nigeria national team's golden generation, the birth of the MLS and the damage Covid-19 has caused non-league and semi-professional football.

Listen to Giant on Spotify

You're Dead To Me

Greg Jenner, the self-titled Chief Nerd from the BBC's children's TV show Horrible Histories, has created a set of history podcasts for adults. Now into its second season, it covers topics including the infamous pirate Blackbeard, Boudica, the Spartans and the richest person to have ever lived, Mansa Musa. A comedian joins Jenner and another historian on the show to keep things light and the result is a funny, informative and often corrective romp through time.

Listen to You're Dead to Me on Spotify

Crimetown is more than just another excellent true crime podcast. It has a structural flavour that's not too dissimilar to TV show The Wire, with each season focusing on a particular and corrupt city in the States. The episodes then provide a zoomed-in reportage with stories of individuals all forming a fascinating collage of that town. Season one is about Providence, Rhode Island. Spotify's exclusive Season two heads to the heart of the Rust Belt – Detroit.

Listen to Crimetown on Spotify

Another superb series from the BBC, Soul Music is an incredibly uplifting look at the power of songs. Each host-less, half-hour episode centres on a single track and the set of differing emotional impacts and connections it made for a string of famous and non-famous people. What you hear is a set of wonderful and different stories about the same piece of music with each speaker passing the baton to the next so smoothly that it almost feels dreamlike. Have a listen and feel good.

Listen to Soul Music on Spotify

Another Spotify Original, Football Legends is, as the name suggests, focused on the great, or at least well remembered and cult players of the beautiful game. It's hosted by a mixture of football broadcasters, writers and even an ex-player or two, who examine the lesser-known stories from footballers' biographies. Episodes are at around the ten-minute mark and have involved players such as Adebayo Akinfenwa, Carlton Palmer and Andrea Pirlo – and the time Maradona got mugged off by the Pope.

Listen to Football Legends on Spotify

Who The Hell Is Hamish?

Hamish Watson was sentenced to jail in 2019 for swindling victims out of more than $7m, but that was only the tip of the iceberg in terms of what this Syndey-born surf-dude-cum-conman got up to. This brilliant podcast unravels the methodology behind Hamish's litany of crimes and the cheek with which he got away with it, across so many countries, for so long.

Listen to Who the hell is Hamish on Spotify

Now back for a fifth season, Unexplained is a haunting and unsettling bi-weekly podcast about strange and mysterious real-life events that continue to evade explanation. The host, Walthamstow-based Richard Maclean Smith, brings a refreshingly different style compared the slew of excellent US investigative podcasts. The constant, disturbing soundtrack in the background also helps to add to that sense of folklore horror.

Listen to Unexplained on Spotify

Investigative journalism has found a new home in podcasting and can even adapt when the crime being investigated ends up getting solved just before the first episode is aired. It turns and adapts and, in the case of season one of In The Dark, provides a fascinating insight into the failures of a law enforcement system that took 27 years to solve a murder that could have had its case closed on the night of the crime.

Listen to In the Dark on Spotify

Forget about Train Guy, quiz shows and the Big Night Out: it turns out that the real genius of Bob Mortimer is his impressions of Newcastle United legend Peter Beardsley and his hen-pecking wife with a poached egg obsession. Loosely based on football, it also features a very amusing caricature of one-time England manager Roy Hodgson and his love of Warhammer. Of course it does.

Listen to Athletico Mince on Spotify

Slow Burn takes huge, famous incidents – Watergate, Clinton's impeachment and, surprisingly, the murders of Biggie and Tupac – and unfolds the details until it becomes something far, far larger than you had ever imagined. If you want to know just how powerful and pervasive politics is, then prepare to take a peep behind the curtain.

Listen to Slow Burn on Spotify

Love a prison drama? How about the real thing? Ear Hustle brings the everyday stories from the day-to-day lives of inmates at California's San Quentin State Prison. The show itself is recorded in the correctional facility and hosted by one of its inmates. The title of the show is prison slang for eavesdropping. Have a listen to what they heard.

Listen to Ear Hustle on Spotify

He's been at it since 2015, but somehow The Adam Buxton Podcast just seems to keep getting better and better. If you've not yet tuned in, it's a comedy talk show where the Norwich-based host interview his friends and other celebrities, and usually introduces each piece with a walk through the countryside with his dog. Better than it sounds, honest.

Listen to The Adam Buxton Podcast

To say that stand-up comedian Marc Maron is the Adam Buxton of America is in no way accurate, but their podcasts do occupy a similar niche. The format is more or less the same – Maron interviews famous celebs, they chat, we laugh – but, not being unfair to Buxton, the celebs are bigger and the podcast is even more long-standing. Glance through the list of over 1000 episodes and let rip.

Listen to WTF with Marc Maron on Spotify

Man In The Window

If you want a particularly brilliant and terrifying true crime story, then this one's definitely for you. This eight parter from the Los Angeles Times is tale of the Golden State Killer, 12 years of horror and his more than 150 victims. Try Dirty John from the same makers once you've managed to get over this one.

Listen to Man in the Window on Spotify

NPR's race and identity remix has been running since 2016 and is still going strong. It's hosted by two US journalists of colour who tackle the tricky issues and stories about race and ethnicity, the answers to which they're very often not too sure about themselves. What drops out is an interesting, intelligent, highly informative and always political 45 minutes, or thereabouts. This is one where you're probably best off starting at the beginning. Enjoy the ride.

Listen to Code Switch on Spotify

This Gimlet show is a tech podcast without the heavy nerdiness. Each episode, hosts PJ Vogt and Alex Goldman investigate issues and annoyances of the internet age. Through the show's tech support hotline, the pair examine memes, connected pop culture, scammers, the the extent to which Facebook is spying on you and much more. All troubles of the modern age are addressed and, sometimes, solved.

Listen to Reply All on Spotify

Stuff You Should Know

Practically as old as podcasting itself, SYSK has racked up over 1400 episodes since birth in 2008. Hosted by two writers from infotainment website HowStuffWorks, each listen is an in-depth look at subjects including how narcolepsy works, heroin and the massacre at Tiananmen Square. No need to start at the beginning. Just flick through and download a few topics of interest.

Listen to Stuff You Should Know on Spotify

If you haven't heard about it already, this podcast from This American Life is one of the best series out there. It's something of a tour de force of journalism because, really, it's the most fascinating story about nothing at all. The seven episodes cover sympathetic host Brian Reed on his journeys down to Woodstock, Alabama – a nowheresville of America – with some incredible characters and stories. It's from the makers of Serial. You should listen to that one too.

Listen to S-Town on Spotify

This investigative series from the BBC uncovers what could go down as the biggest con of all time. Combine the lawless, get-rich-quick mentality of the cryptocurrency rush, the evils of multi-level marketing and one seriously impressive front lady and what arises is a billion dollar fraud that's still hooking people in today. Like many such tales, it's just a pity it's only a handful of episodes long.

Listen to the The Missing Cryptoqueen on Spotify