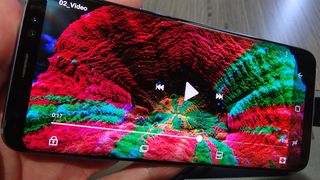 Samsung has a lot riding on its new Galaxy S8 smartphone, which was revealed earlier this week (with the usual outlandish fanfare). Following on from the Note 7 recall debacle, Samsung needs its new flagship to be a certified hit, and in so doing secure the company's status as - at the very least - the smartphone brand of choice for anyone who doesn't want an iPhone.

But it won't just be Samsung that will be watching the S8's reception with interest. The device will also act as guide for where smartphones and tablets are heading next, with plenty of new tech on the horizon for portables, not least when it comes to audio and video playback. Sadly, some of these changes look set to be a little confusing for consumers...

The headphone jack isn't dead (yet)

Are we getting rid of the headphone jack or not? The ferverish speculation around the iPhone's removal of the trusty 3.5mm headphone jack was only matched by the subsequent deluge of 'RIP headphone jack' articles. And yet, there it is, staring us in the face right there on the biggest phone of the year so far.

Apple isn't the only one to have scrapped the 3.5mm jack - HTC and Motorola have also released phones without it. So, depending on your choice of handset, the simple act of connecting a pair of headphones could require a Lightning connection, USB-C connection or a 3.5mm jack. And don't forget you'll need different charging cables and accessories, too. Something to think about when you buy a new phone (or new headphones).

MORE: These are all the Apple Lighthing headphones on sale

Bluetooth is getting better

The obvious alternative to worrying about wires is to go wireless for your portable audio fix. Samsung's Galaxy S8 is the first phone with Bluetooth 5.0, which brings with it the promise of a stronger connection, faster data-transfer speeds and the ability to connect to more than one set of headphones or speakers at once. That better connectivity could pave the way for better-quality audio, while the mesh networking will allow Bluetooth products to be much smarter, notably when it comes to multi-room audio.

High-res (but don't tell anyone)

Talking of better audio quality, high-res support does now seem to be a given on high-end Android phones, and it's here on the Galaxy S8... and yet, you might have missed it. Four years ago the LG G2 became the first phone to support hi-res audio, and LG has flown the flag for high-res audio on mobile phones ever since. And other big players have followed suit, including Samsung and Sony (but not Apple).

However, Samsung doesn't deem it necessary, sadly, to shout about it. In fact, Samsung instead highlights, "Ultra High Quality Audio Playback". Rest assured, this will do little to help any sort of mainstream movement towards high-res audio. Everyone loves their own brand, and it seems Samsung would rather create its own than use the established names and indeed logos. Talking of which...

HDR is here - in various forms

Having become the acronym to look out for in TV world, HDR is now making its mark in mobile, bringing high-dynamic range video to your smartphone. This isn't the first HDR phone, but it is the first to be Mobile HDR Premium certified by the Ultra HD Alliance.

This is good news for better video quality but, like TVs, there are various types of HDR being adopted by different brands. So, for example, while it's vanilla HDR on the Galaxy S8, it's Dolby Vision on the LG G6. And the available video content will also come in different HDR guises, too. And while there is crossover - you can read all about HDR here - we can't help thinking there will also be some confusion.

Despite the inclusion of HDR and the promise of "the same vibrant colours and contrasts that the filmmakers intended", the Samsung Galaxy S8 doesn't have a 4K resolution screen. So you won't quite get 4K video how it's intended - it'll play but scaled to fit the 2960 x 1440 resolution screen.

With the Sony Xperia XZ Premium the only 4K phone on the market, it seems 4K isn't quite the draw on the spec sheet it was once tipped to be. It might be that we can put 4K phones on the back-burner for a while. Considering the size of the average smartphone screen, we can probably live with it.

MORE: 4K Ultra HD - everything you need to know

Both Samsung and LG have taken it upon themselves to tweak the aspect ratio of their flagship phones. But, surprise surprise, in not quite the same way. The LG G6 launched with a 18:9 aspect screen, while the G8 has an 18.5:9 aspect ratio. Both of these screens are departures from the more traditional 16:9 phone (and TV) screens.

The phones are adopting the new 2:1 Univisium aspect ratio, which aims to find a middle-ground between the differing aspect ratios of TV (1.78:1) and film (2.20:1). Google is encouraging app developers to support the format, while Netflix is already shooting much of its new content in 2:1. So LG and Samsung are clearly betting on this for the future of video.

While you needn't be kept awake at night by this change, it remains to be seen how various video formats will display (black bars, anyone?) and it also means that two phones that seem to be the same size on paper may no longer quite have the same screen real estate. But you can let us worry about working that out...

MORE: The 5 best smartphones you can buy right now