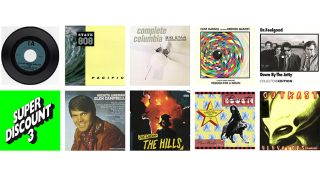 With over 500 special edition vinyl records due to go on sale on Saturday morning, enthusiasts are going to be spoilt for choice. The releases span multiple genres, so there should be something for everyone (even for the 48% of people who don't actually listen to the records they buy).

We've thumbed through the Record Store day releases and hand-picked ten of the best records on offer, which we suggest you try and get your hands on...

It’s no coincidence High Fidelity (the vinyl snob’s movie of choice) opens with the needle being dropped onto You’re Gonna Miss Me – you can get yourself a slice of the far-out action on a 7in single (limited to just 2000 copies) that features the even-tougher-to-find French E.P. stereo mix.

Jimmy Webb wrote some enduring tunes, but none has generated the same ubiquity as his Wichita Lineman, and it’s Glen Campbell’s 1968 reading that’s the definitive version of what’s sometimes called ‘the first existential country song’.

This lushly orchestrated recording chimes perfectly with the acknowledged virtues of the vinyl format, and as a 7in single (on red vinyl, no less) it’s as good a way to commemorate Campbell’s 80th birthday this month as any.

Ahead of the cinema and Blu-ray/DVD release of Born To Boogie (a 1972 T.Rex concert movie directed by Ringo Starr and originally released by The Beatles’ Apple Film) next month, there’s a double-album, limited edition, gatefold sleeve, coloured vinyl, numbered vinyl edition of the soundtrack to be enjoyed.

Lovingly remastered and promising to be, at the very least, a test of your system’s ability to convey teenage excitement, it’s a masterclass in the glam-rock crunch’n’roll that made Marc Bolan an unlikely heart-throb and authentic superstar.

An influence on the likes of The Ramones and Blondie despite being a cheerfully unreconstructed and boozily bluesy pub-rock opus, Down by the Jetty was a throwback even when first released in 1975.

Mastered and mixed in mono just to hammer home the point, it’s a wayward and attitudinal listen that may well be the finest recording ever to emerge from Canvey Island.

The RSD reissue is a mono affair too, which is a whole other challenge to set your system, and is pressed on white vinyl.

As is widely acknowledged, the 90s proper began at the fag-end of the 80s – and this is truer still where popular music is concerned. Pacific State is a fine case in point: released in 1989, it’s the sound of the club chill-out room for the rest of the 20th century.

Of the 42 mixes of Pacific State 808 State-r Graham Massey claims exist, three are collected here on a 12in single for Record Store Day. The 750 UK copies are on blue vinyl for additional late-80s kudos.

In some ways Big Star are the perfect Record Store Day proposition: a band that recorded and released some imperious pop songs to absolutely no acclaim whatsoever, who disintegrated before completing a (harrowing) third album and only gained any kind of critical traction years after their dissolution.

Late 80s college-rock deities like REM worshipped Big Star though, and a reunion was inevitable. Live at University of Missouri 25/4/93 does exactly what it says on the sleeve, and there’s additional RSD credibility – as well as exciting high-fidelity potential – thanks to the album being cut from the original mixing-desk masters.

There was a time (the mid-90s, to be exact) when the French instinctively understood dance music like no other nation, and Étienne de Crécy understood it better than most.

Super Discount, which has been out of vinyl print for well over a decade, ruled the post-club come-down roost for years after its 1996 release, and for RSD is back on ultra-heavyweight vinyl.

Want to know just how warm and deep your system’s bass can be? Find out here.

Shame to say there’s currently no prospect of any new Outkast material, so instead let’s marvel again at their inventiveness, playfulness and sheer brio on Elevators (Me and You). And then let’s marvel rather queasily at the fact ATLiens (the album from which this is taken) is now 20 years old.

Format-wise they’ve gone to town for Record Store Day – this is a 10in, fluorescent-green 45rpm single with four new mixes included.

Ex-Pop Will Eat Itself grebo guru Clint Mansell has enjoyed the most remarkable second act of his recording career as an in-demand scorer of Hollywood movies.

Able to flit effortlessly between art-film and blockbuster, it’s his work with director Darren Aronofsky that’s given him absolute ubiquity.

His Requiem for a Dream soundtrack is a lushly widescreen and dynamically wayward recording, and features Lux Aeterna (a piece later retooled as Requiem for a Tower for The Lord of the Rings trilogy and subsequently having a life everywhere from Top Gear and Sky Sports to America’s Got Talent and The Da Vinci Code).

Because Abel ‘The Weeknd’ Tesfaye hasn’t quite achieved omnipresence in the last 12 months (a Number One album, show-stealing performances at the Brits and the Oscars, and stadium tour with Rihanna notwithstanding), he’s releasing The Hills (a big hit all over the world) for Record Store Day with two exclusive mixes featuring Eminem and Nicki Minaj.

Expect the sort of withering low-frequency attack that will have less-than capable systems cowering.

If you want a complete rundown on all this year's releases, you can find them on the official Record Store Day website.

MORE: How a vinyl record is made