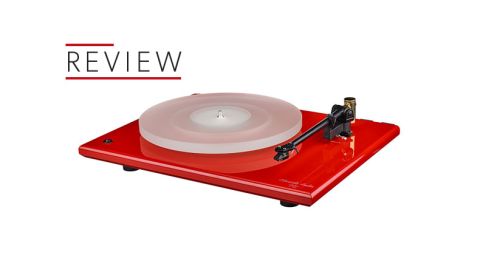 It’s not often we open a review on a sour note, but it is worth us qualifying early on why this turntable is receiving three stars rather than the four its performance really deserves.

It all rests on the spindle. Or, perhaps more correctly, it doesn't. As our testing gets more in-depth, we find more and more of our records that won't fit over it. By the time the dust clears, just over half of the 60-plus records we want to listen to won't go on – the spindle is simply too thick.

It isn’t by any means an insurmountable issue for Edwards Audio to address - and when the company does so we will very happily reconsider our rating to reflect the TT2SE’s admirable sonic performance without caveats.

Until then, we can’t truly recommend a turntable unable to play a significant chunk of our record library.

Will every one of these turntables share the same issue? A second sample we receive shares the same shortcoming, so can't say they won't. If you are planning to buy one now, proceed with caution - and only after testing it with a good sample of your collection.

It’s a shame, as we really do like everything else about the TT2SE, which Edwards Audio describes as an upgrade to the TT1 we awarded five stars back in 2011.

The basic structure comprises a custom-designed 25mm MDF plinth – available in high gloss finishes of black, white or the rather fetching red of our sample – onto which is mounted an AC motor and the TA202 tonearm.

The aluminium sub-platter is driven by the company’s synthetic blue belt, running on a 5mm ceramic ball – all custom made. The translucent 18mm acrylic platter, which Edwards Audio believes sounds better without a mat, typifies the deck’s clean aesthetic - there's only a small circular on/off switch adorning the entire structure.

Its black Pocan body (a rigid, glass-reinforced plastic material) houses a Gyger S line-contact stylus, and we gave the 1042 a five-star review back in April for its revealing, rhythmic performance – despite its being a little bit fiddly to install.

Read all our cartridge reviews

That is the only real work you need do to get the TT2SE set up, bar putting in place the belt and platter and setting the weights.

The counterweight itself is a rather unusual design: a gold bar with a screw-top to tighten, which perhaps requires marginally more effort than those of your usual doughnut shape. But once set you never need touch it again.

With preparations complete, we sit back and spin Boards Of Canada’s Tomorrow’s Harvest.

We can immediately hear why Edwards Audio suggests Goldring to be an ideal partner for the TT2SE: there’s so much room in this recording for exploring the album’s synth textures, right from opening track Gemini - and this partnership takes full advantage of its chance to have a real nose around.

The TT2SE makes the contrasts in these digital instruments and field recordings obvious, highlighting the spaces in between but never losing sight of any element. Each line breathes, and all breathing in unison, in an organisational sense and also in terms of timing.

The rhythmic response is fast but natural, recognising the inherent groove as much as focusing on sheer precision.

That aspect is aided, of course, by the TT2SE’s grasp of dynamics as well, its ability to pick out lead notes and charge them with emphasis.

Take Reach For The Dead, for example: its lazy trap rhythm is delivered by a combination of programmed percussion and the leading notes in its arpeggiated synth motif - and the Edwards Audio has the wherewithal to deal with both.

When it comes to balance, the TT2SE stays true to the form we’ve discussed so far, merely reading the information from our LPs and delivering it without overt colouration.

Edwards Audio hasn’t artificially sweetened the frequency range with ‘typical’ vinyl warmth – though there is plenty of low-end supporting its rich midrange – nor is there any coarseness in the upper register.

It’s just a pleasingly natural balance, no matter what we are able to play.

In fact, all that separates its overall performance from being that of a five-star product is a little intensity. We're desperate for a little extra punch when it comes to playing the more energetic arrangements we feed it.

Take Radiohead’s Kid A, for example: far from the most raucous LP in our collection, but one whose temperament (drifting between sedation and fist-shaking angst) highlights the TT2SE’s slight energy deficiencies.

It’s all extremely pleasant to listen to, but we want more from tracks such as The National Anthem and Idioteque, especially as the Edwards Audio is able to render the arrangements themselves beautifully.

But let’s not make too big of a deal about this: the performance is far from lethargic or lightweight. We would just appreciate an extra shot of adrenaline from time to time.

While testing, for example, we set up a Pro-Ject Classic next to the TT2SE : a little more affordable, yes, but while it possesses the extra ounce of enthusiasm we crave there is a relative lack of detail and sense of timing that makes the Edwards Audio better equipped for the kind of deeper listening we’d want to do with a deck costing around a grand.

The one to beat at this price is of course the Clearaudio Concept, which does it all and it style. But there is no shame in being bested, marginally, by a turntable so accomplished it possesses a glut of What Hi-Fi? Awards.

So the only thing really holding us back from recommending the TT2SE is its easily remedied issue regarding the spindle. After that, it is a hair’s-breadth away from being a five-star performer.

When we’re able to get a record spinning, this is the kind of performance with which we could be content for a long time.

See all our Edwards Audio reviews