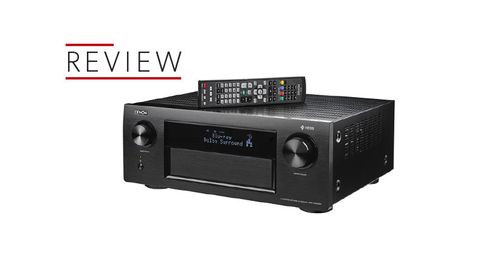 The lateness of this review, some time after its Denon AVR siblings, is not down to our tardiness nor a lack of enthusiasm. However, when we first tested the X4400H more than six months ago, we sensed something wasn’t quite right.

Given our affection for the other home cinema amplifiers in the line – the X6400H picked up a What Hi-Fi? Award – and their familial presentation, we struggled to understand how this particular model could fire not only wide of the mark, but appear to be aiming at a separate target altogether.

But rather than persisting with our review, like a sour-faced restaurant-goer taking delight in the prospect of penning a vitriolic TripAdvisor entry, we resolved to request a new sample. Which took a while to arrive.

Ignoring its performance for a moment, the initial reason you might opt for this over the more affordable X3400H is its extra speaker terminals.

While the 3400 caters for a 7.2 configuration, with either surround back or two height channels depending on your preference, the X4400H is the cheapest in the range to offer 11.2 capability - alongside all that makes its smaller sibling so exceptional.

It is again equipped with Dolby Atmos, DTS:X and DTS Virtual:X for those without height channels but anxious for a similar, though simulated, experience.

There are again eight HDMI inputs with HDCP 2.2 compatibility – seven on the back and one at the front – able to deal with 4K Ultra HD, High Dynamic Range and 3D programming.

Wireless connections include wi-fi, Bluetooth, AirPlay, Spotify Connect and HEOS multi-room compatibility, while high-resolution audio files saved as ALAC, FLAC or WAV can be output at up to 24bit/192kHz alongside 2.8/5.6MHz DSD files.

Set-up is run by the built-in and almost foolproof Audyssey programming - all you need do is attach the included microphone to its input beneath the flap on the X4400H’s facia and follow the on-screen instructions.

But additional speaker channels is far from the main reason we’d urge you to save your pennies and take home the X4400H. These Denon AVRs all share that powerful family sound, and with each upward step performance improves.

We spin a 4K Blu-ray of Baby Driver and are treated to a performance that seems tailored to the disc. From the initial jabs of The Jon Spencer Blues Explosion’s Bellbottoms that soundtracks the opening heist, that familiar combination of muscle and musicality is patently clear.

Car boots slam and shots fire on the beat, with a sense of timing critical to Edgar Wright’s concept for the film. Our speakers rumble as motors rev up, and there is haymaker punch to the entire presentation.

The X4400H is comfortable with the surround mix as well: the combination of the soundtrack playing while engine sounds are wrapped around us gives the sensation of almost being in the car with Baby and his cohorts.

But to focus upon the X4400H’s heft would be unfair, as this amp is equally capable of exploring the subtleties of the sound.

Cheesy as they may be, the intimate moments between our titular character and love interest Debora are delivered with a light touch - dynamically, at least - while making most of the Denon’s grip on low frequencies to anchor voices.

Of course, the sound from an AVR can never quite compare to a similarly priced stereo amplifier but, and given its hi-res audio features, the Denon needs to be adept at both. While Baby Driver is indeed a film dictated by its soundtrack, the Denon's musical performance is even better showcased in stereo.

It is much as you’d expect: a weighty, full-bodied sound with good timing and a better than decent handle on dynamic range.

Our reference PMC speaker package is not the most likely partner for a sub-£1000 amp, but one such as Monitor Audio’s Silver 200 AV12 (which we have praised for the front pair’s stereo performance) would make a fine combination for an all-in-one home entertainment system.

Much like a Seth Rogen film, once you’ve seen one of our reviews from this Denon AVR line up you’ve pretty much seen the lot. It’s only really the specs that change.

Not the finest act of self-promotion, perhaps, but it does highlight just how fine this group of products is.